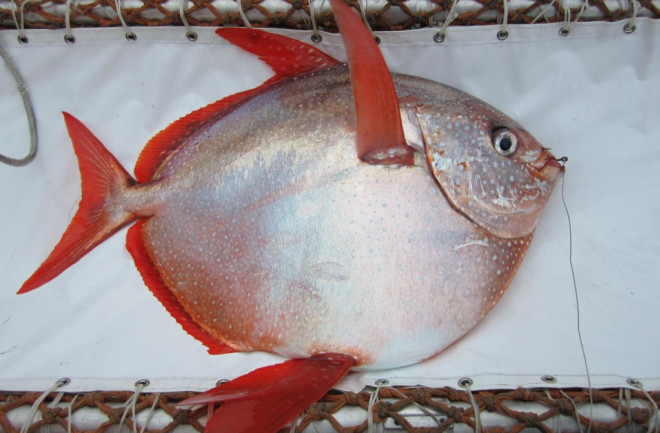 This opah was caught during an NOAA Fisheries survey off the California coast. (Credit: NOAA Fisheries/Southwest Fisheries Science Center) All fish are cold-blooded. Just a week ago, that statement would have been true. But on Thursday, scientists announced they discovered the world’s first warm-blooded fish, the opah, forcing us to rethink some of the most basic biological concepts we learned back in elementary school.

Opah, also known as moonfish, are rotund — almost comically so — predatory fish that hunt for prey in cold, dark waters up to 1,000 feet below the ocean’s surface. Although they aren’t fished commercially, opah are often accidentally caught in fishing nets. Hawaiians consider opah a sign of good luck, and the fish are often given away as a gesture of goodwill. But opah have long intrigued scientists because they are such nimble hunters in deep water; most predatory fish move slowly at these depths and wait for meals to come to them rather than chase them down. Things got even stranger when Nicholas Wegner, a researcher at the National Oceanic and Atmospheric Administration, examined an opah gill sample. All fish gills have two types of vessels: One set transports stale blood from the body to be oxygenated, and another set transports oxygenated blood back into the body. But in opah, blood traveling into the gills is warm. Opah generate heat by vigorously flapping their fins to swim, which also speeds up their metabolism.

NOAA Fisheries biologist Nick Wegner holds an opah caught during a research survey off the California coast. (NOAA Fisheries/Southwest Fisheries Science Center) Wegner noticed that vessels carrying warm blood away from the body wrapped around vessels carrying cold, oxygenated blood into the body. The unique setup raises the temperature of inbound blood before it travels to organs and muscles. It’s a process called counter-current heat exchange. Automobile radiators regulate engine temperatures the same way, but in reverse. In this way, opah can maintain a body temperature that is roughly 41 degrees Fahrenheit warmer than the water they swim in. Wegner published his observations Thursday in the journal Science.

Other top sea predators, such as tuna and sharks, have similar vascular systems to warm specific parts of their body, such as their eyes or swimming muscles, but they lose that heat when they dive deeper into cold water. As a result, they need to repeatedly reheat their bodies in warmer waters closer to the ocean surface. Since opah have a heating system built into their gills, they don’t need to waste time seeking warmer waters. Instead, they can spend their time hunting in cold water and rely on their keen vision and speed, which is made possible by their warm blood. Indeed, there may be millions of fish in the sea, but none — that we know of — like the opah.