Found in 1991, researchers have since analyzed Ötzi Iceman for many scientific purposes, along with mapping all 61 ancient tattoos. 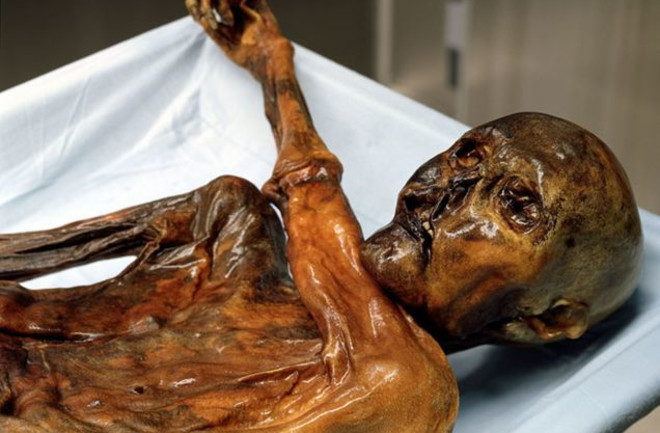 This article was originally published on January 30, 2015.

Proving that tattoos can age well, all 61 tattoos on the mummified Ötzi the Iceman have been mapped — and they still look pretty darn good, all things considered.

Anthropologists mapped the ink on the 5,300-year-remains using a new imaging technique, revealing previously-unknown tattoos. With this new census in hand, researchers hope to finally answer the question of what the tattoos mean.

In September 1991, two tourists discovered the Iceman’s remains nestled into a glacier in the Italian Alps. Since then, researchers have rigorously analyzed the Iceman to paint a picture of what life was like during the start of the Bronze Age some 5,300 years ago. We now know that he suffered from a variety of degenerative ailments and ultimately died from an arrow wound to the shoulder. However, his peculiar horizontal line tattoos are still a formidable riddle to solve.

Early studies initially detected some 49 to 57 tattoos, eventually rising to 59. The tallies varied over time because his tattoos are difficult to spot. For one, the guy is 5,300 years old so his skin is understandably weathered and browned. On top of that, his tattoos were likely applied by puncturing the top layer of skin and rubbing in charcoal. Dark, ancient skin and black ink don’t offer a lot of contrast.

More on Ötzi the Iceman:

In order to up the contrast, researchers used a multispectral imaging technique that detected color differences on the skin — even in the non-visible range. This upped the contrast on the Iceman’s body, and revealed a set of chest tattoos not seen before, bringing the final tally to 61 tattoos. They published their findings in the Journal of Cultural Heritage.

This map shows the locations of all 19 tattoo clusters. (Credit: EURAC/M.Samadelli/M.Melis)

What Does Your Tattoo Mean, Bro?

Iceman’s 61 tattoos are organized into 19 different groups. Each group of tattoos is simply a set of horizontal or vertical lines. It is believed that the tattoos served a therapeutic or diagnostic purpose for the Iceman, because the tattoo groupings tend to cluster around the lower back and joints — places where Iceman was suffering from joint and spinal degeneration.

A closer look at some of Iceman's tattoos. (Credit: EURAC/M.Samadelli/M.Melis)

The tattoos may have demarcated the locations for acupuncture treatments, or perhaps the tattoos were the treatment. However, in the most recent tattoo inventory, researchers spotted a tattoo cluster on Iceman’s chest where there were no signs of an ailment. This newly discovered cluster could challenge prevailing theories about the purpose of the Iceman’s tats. But researchers were quick to point out that he may have suffered from other health issues that caused pain in the chest area but that weren’t recorded in the remains.

Read more: Artifacts Are Resurfacing as Glaciers Melt, Some as Old as 6,000 Years

Ultimately, all theses theories could be dead wrong and the tattoos symbolic of something entirely different. But assembling a definitive inventory of the Iceman’s body art gives future researchers a firm foundation to start from.

And it also gives a new catalog of designs for would-be inkers, mummy-style.