It's the first skull ever discovered for a cross between a beluga whale and a narwhal. 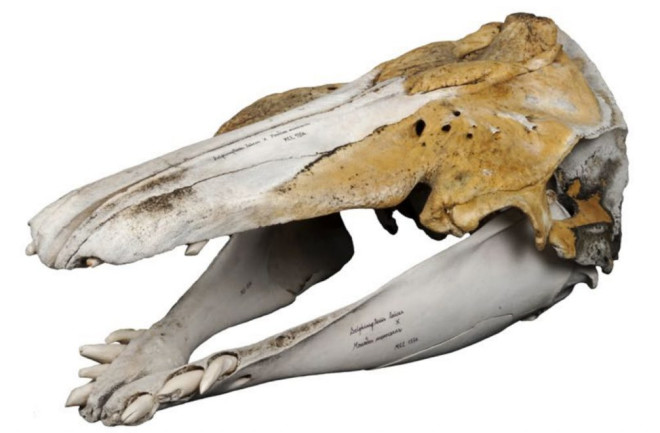 The first “narluga” skull ever to be discovered. The hybrid mixes traits of its beluga and narwhal parents. (Credit: Mikkel Høegh Post, Natural History Museum of Denmark.)

While visiting West Greenland in the 1980s, an Inuit hunter killed an odd-looking whale. He realized there was something unique about the animal, so he kept its skull. Years later in 1990, a researcher from the Greenland Institute of Natural Resources spotted the specimen mounted on the hunter’s toolshed.

In its top jaw, the skull featured what looked to be a narwhal tusk, though nowhere near as long. The bottom jaw, though, looked distinctly un-narwhal-like; it had teeth, to begin with, and they stuck out at odd angles. The hunter reported he had caught the whale during a subsistence hunt. Two similar-looking whales had been nearby and he had killed these animals as well. All three whales had evenly gray skin and pectoral flippers akin to belugas’. But their tails looked like narwhal tails.

Now University of Copenhagen researchers find the skull belonged to an unprecedented hybrid animal — a cross between a narwhal and a beluga.

“It appears this is very uncommon,” molecular ecologist Eline Lorenzen, who led the new study, said. “As to my knowledge there is no other evidence of hybridization between these two species in the world.”

A Whale Of A Find

Belugas and narwhals share some similarities. They are the only living members of the Monodontidae family and both live in Arctic waters year round. They are also about the same size, some 12 to 18 feet long, and they mainly feed on fish at mid-depth, though narwhals also eat squid and can dive farther down than belugas.

The two species also show striking differences. Belugas have pure white skin, whereas narwhals have speckled brown, black and grey skin dotted with white flecks. Belugas have as many as 40 teeth on the upper and lower jaw. Narwhals in contrast don’t have any bottom teeth and males wield a formidable tooth that can grow as long as 10 feet. Scientists estimate the two whales became different species about five million years ago.

After its discovery, the skull made its way to the Natural History Museum of Denmark. Lorenzen, who is the curator of the mammal collection there, was immediately curious to find out whether the animal was a hybrid. Under her direction, Mikkel Skovrind, a newly minted doctoral student, took on the project.

The researchers extracted DNA from the skull’s teeth. Then they compared the genetic material to DNA from eight belugas and eight narwhals from the same area. The analysis revealed the whale’s DNA was 54 percent beluga and 46 percent narwhal, the team reports Thursday in the journal Scientific Reports. The discovery means the parents of the “narluga” were from different species.

Further analysis of DNA from mitochondria, the energy factories of the cell that are passed down to offspring only from mothers, showed the animal’s mom was a narwhal. The researchers also assessed sex chromosomes and found the hybrid was likely a male.

That the “narluga” exists means belugas and narwhals can mate and produce viable offspring, the researchers report. But this individual may be the only one.

“We have also analyzed the genomes of narwhal and beluga for another study, and find no evidence of hybridization between the two species for at least the past 1.25 million years. So this is no common occurrence,” Lorenzen said.