One of the largest groups of baleen whales ever documented gives hope for recovery of the species from whaling in the 1900s, which nearly wiped them out. 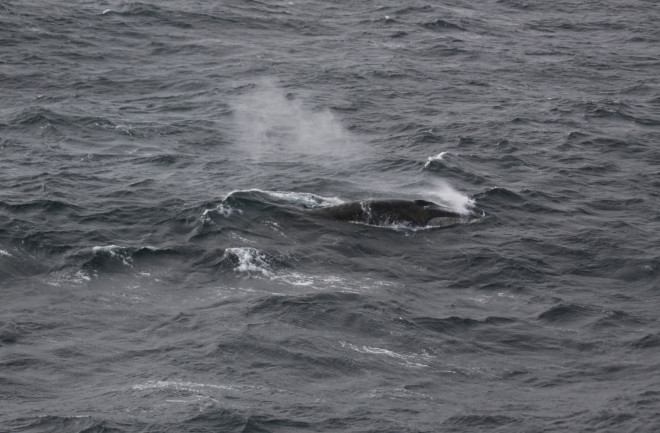 In the frigid Southern Ocean, scientists discovered a feeding frenzy of 150 fin whales — one of the largest groups of baleen whales ever documented. Whaling dwindled the species to under two percent of its original population size in the 1900s, but the new study provides a glimmer of hope for recovery.

“I’d never seen so many whales in one place before,” says Bettina Meyer, a biologist at the University of Oldenburg and co-author on the study in a press release.

The team mapped krill — the whales’ meal of choice — using an echosounder like you might find on a fishing boat. Meanwhile, a camera team from the BBC hovered above, filming the whales as researchers counted them. They surveyed 3,251 kilometers (around 2,000 miles) of sea and 100 groups of whales.

Most groups had fewer than five members, but in 2018, researchers found feeding aggregations of 50 and 70 individuals. When they returned in 2019, they found a group of 150 in the same spot.

The feeding whales lunged towards the water surface with sharp turns and gaping mouths, trapping krill from the top of the water column. Along the horizon, they recorded dozens of blows from the surfacing beasts.

The whales’ return is good for the ecosystem. They kickstart a nutrient cycle called the “whale pump.” Whale feces are iron-rich and fertilize the ocean. They stimulate phytoplankton growth, which the krill then eat. When whales declined in the 1900s, krill did, too — a paradox between whales and krill.

The return to the feeding grounds could be a lifeline for the krill stock that has declined in recent decades.

Meyer says in a press release that the finding could mark the end of a century-long decline in the population. “This could be a good sign that, nearly 50 years after the ban on commercial whaling, the fin whale population in the Antarctic is rebounding.”