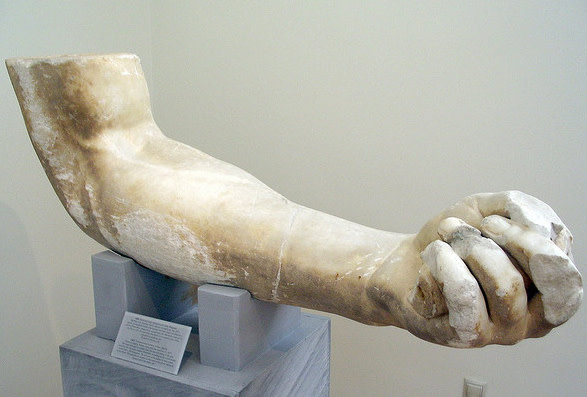 No matter how much of a critical thinker you consider yourself, your brain is pretty gullible. With a few minutes and a couple of props, your brain can be convinced that one of your limbs is made of rubber or invisible, or that your whole body is the size of a Barbie doll's. All these illusions depend on your senses of vision and touch interacting. But a new illusion trades sight for sound. By hearing the sound of a hammer striking marble each time it tapped their hands, subjects came to feel that their limbs were made of stone. In the original rubber hand illusion, first published in 1998 by psychologists Matthew Botvinick and Jonathan Cohen, subjects sit with one forearm resting on a table. A little wall blocks the subject's own arm from his or her sight, while a rubber arm just inside the wall is clearly visible. A researcher sitting on the opposite side of the table simultaneously strokes the backs of the rubber hand and the real hand with paintbrushes. As subjects watch the paintbrush stroking the rubber hand and feel the action on their own skin at the same time, they come to feel a powerful illusion that the rubber hand is their hand. Scientists have since performed many variations of this experiment, bending people's perceptions of their own bodies in all kinds of freaky ways. (See below for links to stories about a few of those studies.) "The focus of those experiments is embodiment," says Irene Senna, a psychologist at Milano-Bicocca University in Milan, Italy. "Can our body incorporate an external body part?" The findings are relevant to amputees and people learning to use artificial limbs. But Senna and her coauthors were interested in a slightly different question: instead of convincing ourselves that an inanimate hand is our own, can we come to believe that one of our existing body parts is made of a non-human material? This being Italy, the material the researchers chose wasn't novelty-shop rubber, but stately marble. To create the illusion, they had 23 subjects sit with one forearm on a table. A wall blocked the subject's hand from his or her view—but subjects were able to see the small hammer an experimenter swung toward the hand repeatedly. A piece of metal foil tape on the back of each subject's hand was connected by a wire to the hammer, and to a computer. Whenever the hammer touched the foil, it triggered the desired sound effect: the chink! of hammer striking marble. 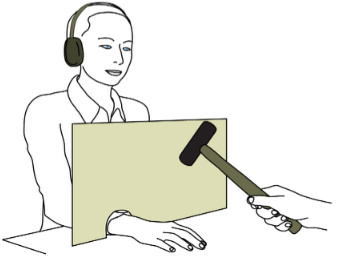 This lasted for about five minutes. A control group of subjects heard the same sound effect, but out of sync with the hammer tapping their hands. Another control group heard a pure tone with each hammer strike, instead of the marble sound. Before and after the experiment, subjects filled out a questionnaire rating the physical qualities of their hands. After scientists performed the illusion on them, people reported that their own hands felt more unnatural, stiffer, heavier, and less sensitive. Many of the subjects also told researchers, without being asked, that their hands felt stiff or numb. (In the control groups, the illusion didn't work.) Like previous rubber-hand-inspired studies, this one could be helpful to the science of prostheses—in this case, helping us understand why people can so easily adopt a limb that's not made of skin and bones. It also shows that a combination of sound and touch cues is enough to trigger the illusion. Yet it's not really clear why our brains are susceptible to this kind of illusion in the first place, Senna says. Obviously it's important for our brains to pay attention to where our limbs are in space, their temperature, and other details that constantly change. But the flesh of our body is a constant. "It would be ideally unnecessary for our brain to infer the material of our body," Senna says. "However, our illusion demonstrates that our brain does not take for granted such information." **************** For more on the rubber-hand illusion: Little People, Big World (on turning people into giants and Barbie dolls, plus my eighth-grade science-fair version of the rubber hand illusion) Rubber Hand Experiment Shows Kids Have More Flexible Body BoundariesSwapping Bodies with a Child Makes Everything Seem Bigger