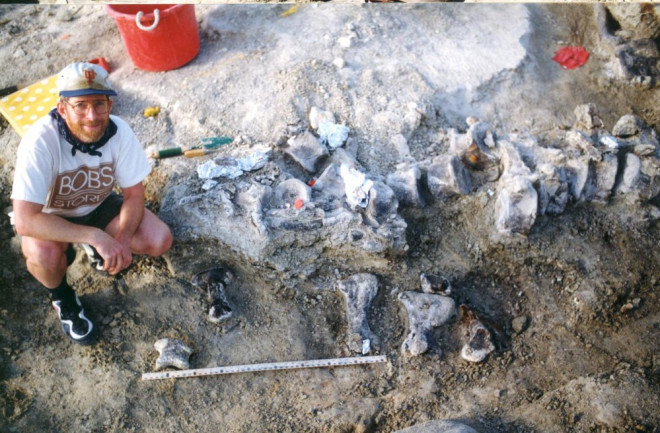 Found: Bigfoot! Or at least a brachiosaur foot that researchers nicknamed Bigfoot. A field researcher poses beside its partial remains in this 1998 photo. Foot bones are in foreground; vertebrae and other bones belong to a different animal. (Credit: Photo courtesy of the KUVP archives)

I don’t know about you, but nothing wakes me up in the morning quite like an announcement from a peer-reviewed journal declaring that paleontologists have found Bigfoot in the Black Hills region of the U.S.

Sooooo…yeah. Not quite. But they are claiming the dinosaur foot they found belonged to the biggest dino ever — which they nicknamed “Bigfoot.” Sneaky clickbait? Sure. But also some interesting science. Read on: The game is afoot.

The new study’s title actually kicks off with “The real Bigfoot.” Really, guys? You know people love dinosaurs already. What’s with the hard sell of the whole cryptid angle? Now you’re going to make a bunch of Sasquatch enthusiasts all verklempt that they’re clicking on stories about research that has nothing to do with a certain hirsute biped. And don’t even get me started on how the Yeti groupies will react.

But let’s look past the hype to the actual science announced today, which had a rather long incubation period. Researchers working in northeastern Wyoming, in the fossiliferous Black Hills region, found a bunch of dinosaur bones. This happened in 1998 (yes, 20 years ago). The fossils belonged to a number of different sauropods, long-necked, whip-tailed herbivores that included the largest animals ever to walk on land.

Among the finds were several foot bones from a single animal that was about 150 million years old. And they were big. Really big. In life, the foot would have been about 3 1/2 feet across. The partial foot was simply way too big to match any of the other partial animals found, such as small examples of a brachiosaur and a diplodocid as well as several camarasaurids, all of them different kinds of sauropods.

A number of subtle features on the giant foot bones allowed researchers to determine it most likely belonged to a brachiosaur.

The team also noted a strange texture on several of the bones: deep, wavy grooves that seemed to start at the edges and move inward, possibly evidence of bone stress when the animal was alive.

So, “Bigfoot” is the largest sauropod foot known to science, and since sauropods were the largest land animals, that makes it the biggest foot ever, which is a cool discovery, even though the announcement took longer to pull off than a Guns ‘N’ Roses reunion.

If size really matters to you, you’re probably wondering “what about Dreadnoughtus (the dinosaur touted in 2014 as the biggest ever)?” Looks like Dreadnoughtus will have to settle for a lower spot on a very big podium. Researchers don’t have enough of the rest of “Bigfoot” to say for sure how big it was, but the partial foot they found is larger than that of the Big D.

There aren’t enough sauropod feet floating around in the fossil record to definitively say “Bigfoot” was the largest dinosaur ever, but based on the foot-to-hip ratios of other brachiosaur and sauropod specimens, the team estimates its leg may have been about 13 feet long.

Most of the supersized sauropods hail from the Cretaceous, showing up millions of years after “Bigfoot.” But there were at least two other jumbo dinos were walking around at the same time, in the Late Jurassic: Tanzania’s Giraffatitan and Spain’s Turiasaurus riodevensis.

There’s also some geographical significance to the find: Together with a much smaller (but much more complete) brachiosaur specimen found nearby, the animals expand the known range of their kind. Brachiosaurs have never been found this far north in the Morrison Formation, the most fossil-rich span of rock in North America. The formation stretches from central New Mexico into Canada and preserves animals that lived roughly 150-160 million years ago.

The study appears today in the online open-access journal PeerJ, so read it for yourself and decide if “Bigfoot” is really a big deal.

My what big feet you have...a brachiosaur similar to the animal that that left a partial foot behind in the Black Hills of the U.S. Researchers estimate its leg, from toe to hip, was about 13 feet long. (Credit: Image copyright by Davide Bonadonna, Milan, Italy)

My what big feet you have…a brachiosaur similar to the animal that that left a partial foot behind in the Black Hills of the U.S. Researchers estimate its leg, from toe to hip, was about 13 feet long. (Credit: Image copyright by Davide Bonadonna, Milan, Italy)