Scientist Shocks Himself With an Electric Eel ... Because Science 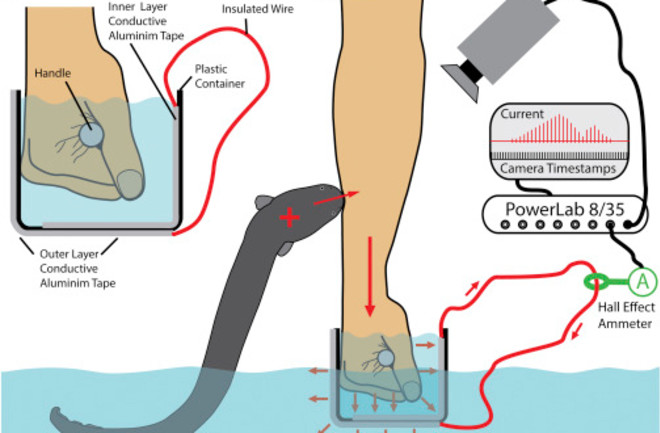 Holy leaping eel! A hall-effect ammeter measured the current through the arm of a human subject as the eel leaped at the arm. (Credit: Catania, Power Transfer to a Human during an Electric Eel’s Shocking Leap, Current Biology, 2017)

Electric eels are fascinating creatures. They emit high voltage electricity to track and control prey, but did you know they also jump out of water to attack threats? They've even been documented leaping at horses and humans.

Kenneth C. Catania, a biologist and neuroscientist at Vanderbilt University who’s studied eels in the past, put himself in harm’s way in order to learn just how shocking eels are.

In a study titled "Power Transfer to a Human During an Electric Eel’s Shocking Leap," released Thursday by Current Biology, Catania found that even small eels can cause significant pain to humans. But thankfully the pain isn’t long-term. And thankfully, Catania is the one taking it for the team here.

This is video from the study shows the electric eel leaping in real time. Fast, yet painful! (Credit: Catania, Power Transfer to a Human during an Electric Eel’s Shocking Leap, Current Biology, 2017)

Catania used a somewhat small eel, measuring in at 40 cm long, from a local fish store for this study. The electric eel was then placed in a custom-made Plexiglas aquarium with water at between 24 and 26 degrees Celsius. Even though the eel was small, it delivered electrical currents that peaked at 40-50 milliamps (mA).

“Although 40-50 mA may not seem like much electrical current, it is far above the levels usually used to study pain and reflexive withdrawal reflexes. Most studies of withdrawal reflexes in humans stimulate with transcutaneous currents in the 5-10 mA range,” Catania writes in the study.

Other animals like horses and dogs have pain thresholds lower than a human, so they would feel great pain from an electric eel, too.

Almost every time he was shocked, Catania involuntarily removed his arm from the tank. He says it feels similar to when you touch an electric fence on a farm. "I was surprised by how powerful even a small electric eel could be," Catania wrote in an email to Discover. "They are amazing animals that have evolved not only a powerful electrical discharge, but behaviors for delivering the electricity efficiently. They are some of the earliest electricians."

This is the same video from the study, but is slowed to 100 frames per second. The red corresponds with high-voltage discharge. (Credit: Catania, Power Transfer to a Human during an Electric Eel’s Shocking Leap, Current Biology, 2017)

All measurements were taken during the peak of the eel’s high-voltage discharge. A wire connecting to the hand chamber measured the current running through Catania’s arm.

While we don’t have a concrete answer as to why electric eels jump at threats, these results suggest it’s to cause intense yet brief pain. If you see an eel, it’s best to evacuate the area or you're at risk of experiencing the electric eel leap.