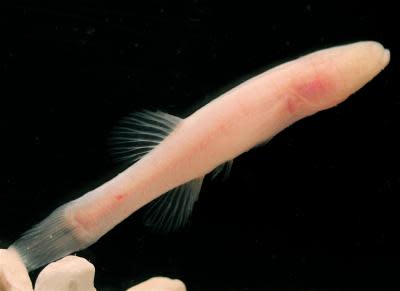 In what might be considered a mixed message outside of the ichthyology world, scientists have named a new species of cavefish after the Indiana University Hoosiers. It's blind, has its anus behind its head, and distinguishes itself from its nearest relative by being a little fatter. But its discovery might help keep the world's other ugly cave dwellers alive, even those not named for sports teams. Cavefish in the family Amblyopsidae live in dark corners of the eastern United States. There are about eight species, though it can be hard to tell them apart just by looking. Features that would normally be helpful are missing: they often have no eyes and no color to their bodies. The genes of these unforthcoming fish, though, may tell stories that their bodies can't. Recently, Louisiana State University biologist Matthew Niemiller found genetic differences between Amblyopsis spelaea cavefish living north and south of the Ohio River. Their DNA hinted that the two populations of fish might not be the same species at all. Working with colleagues Prosanta Chakrabarty and Jacques Prejean, Niemiller followed up on this hint. The scientists gathered 41 fish from Kentucky and Indiana and minutely examined their bodies. These populations have been separated by the barrier of the Ohio River for more than a million years. Over this time, the scientists saw, the cavefish have in fact evolved into two separate species. It's the first time a new North American cavefish has been discovered in 40 years. The authors named the fish on the northern side of the river Amblyopsis hoosieri. "The Hoosier name was to remind people that Indiana was really the birthplace of North American ichthyology," says Prosanta Chakrabarty. Famed ichthyologist David Starr Jordan was President of Indiana University at the end of the 19th century. The Hoosier cavefish is two or three inches long and colorless all over its body, even inside its mouth. Compared to its relative A. spelaea, it's a little more plump, fleshy, and wrinkled (all actual adjectives used by fish scientists). Another difference can be found in the gene for rhodopsin, a pigment that's important for vision. The Kentucky fish have an error in their rhodopsin gene that renders it useless, Chakrabarty says. In the Indiana fish, the gene works fine—though the fish still have no eyes to use it with. Both kinds of cavefish, like their relatives, have their anuses on the underside of the neck instead of at the back of the body. "Having an anus near your head is pretty weird," Chakrabarty acknowledges. "Most animals would agree that we would like our anus as far from our head as possible." The unusual setup may help the fish get fertilized eggs tucked into their gills for brooding, he says, though it's not clear. Although the Hoosier cavefish was only just discovered, it's already considered endangered in Indiana, like A. spelaea. That's because it lives in small populations and is extremely vulnerable to groundwater pollution. They don't have natural predators, but cavefish populations can be damaged or destroyed by quarrying, disease, and even cave tours. Chakrabarty says that discovering the Hoosier fish will help scientists conserve it and other species. "This species is only found in Indiana, in caves that are special and rare. There is added reason to protect this region now, thanks to Amblyopsis hoosieri." The Hoosier cavefish joins a small club of uncharismatic animals named for university mascots. In Alabama, there's the trapdoor spider named Myrmekiaphila tigris in honor of Auburn University's mascot, the Tigers. There's also a new species of amoeba dubbed

The genus is after Mississippi State University's first mascot, a bulldog named Ptolemy. The species is after Bully—the name shared by the school's 20 subsequent bulldog mascots. Published in the journal ZooKeys, the paper on the new cavefish acknowledges its authors' biases in the Discussion section: "Notably, the senior author of the manuscript [Niemiller] is a fervent fan of Indiana Hoosier basketball while the first author is an alumni of the University of Michigan and is not." "I thought I needed to add that line to explain to folks back at my alma mater that I had not switched allegiances," Chakrabarty says. He frequently travels to exotic places where he finds new species, but doesn't feel the need to identify them with school mascots. "I am a huge sports fan but I don't think I will be naming any new species after any other sports teams." "Having said that," he adds, "Go Rangers!" Image: by Matthew Niemiller