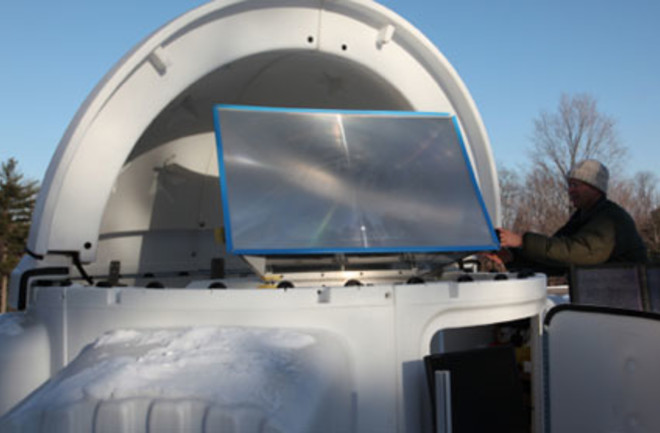 In the hot desert kingdom of Saudi Arabia, finding fresh drinking water has always been a great challenge. For decades now, the state has been providing clean water by converting millions of gallons of seawater via desalination plants that remove salts and minerals from the water.

Now the country plans to use one of its most abundant resources to counter its fresh-water shortage: sunshine [Technology Review]

. Working on a joint project with IBM, Saudi Arabia's national research group King Abdulaziz City for Science and Technology (KACST) has announced that it will open the world's largest solar-powered desalination plant by 2012 in the city of Al-Khafji. The pilot plant will not just supply 30,000 cubic meters of clean water per day to 100,000 people, but will also reduce operating costs in the long run by harvesting energy from sunshine.

Saudi Arabia, the top desalinated water producer in the world, uses 1.5 million barrels of oil per day at its plants, according to Arab News [Technology Review].

In the new desalination plant, the Saudis hope to slash energy costs by deploying a new kind of concentrated photovoltaic technology, which uses lenses or mirrors to focus the sun's rays onto solar panels.

The technology will concentrate the sun 1,500 times on a solar cell to boost efficiency. That’s about three times the solar concentration of most concentrating photovoltaic panels currently in operation [The New York Times]

. The system's upgrade is due to a device that IBM came up with back when the company was designing mainframe computers and trying to ensure that they didn't overheat. The device, called a liquid metal thermal interface, uses a highly conductive liquid metal to transfer heat away. In the desalination plant, the devices will serve as heat sinks to prevent the photovoltaics from breaking down under such extreme, concentrated heat. The energy generated by these solar arrays would then power the plant's desalination process, which will be accomplished via reverse osmosis. In this technique, seawater is forced through a polymer membrane at high pressure, which filters out salt and contaminants. The Al-Khafji plant will use an advanced nano-membrane that IBM and KACST developed, which researchers say allows water to flow through 25 to 50 percent faster than conventional membranes used in desalination plants.

The Al-Khafji desalination plant is the first of three steps in a solar-energy program launched by KACST to reduce desalination costs. The second step will be a 300,000-cubic-meter facility, and the third phase will involve several more solar-power desalination plants at various locations [Technology Review].