Sargassum, a Smelly Seaweed, is Crossing the Atlantic Ocean in Massive Clumps 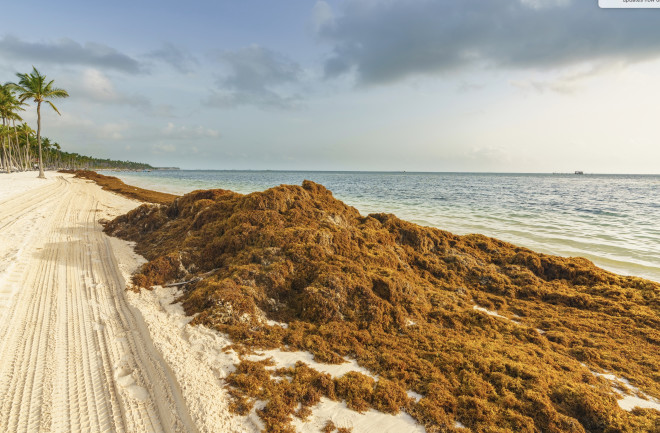 What’s brown, slimy and washing up on beaches from Mexico to Africa? Sargassum — a smelly seaweed that’s been traversing the Atlantic Ocean in massive clumps over the last few years. On satellites, it looks like a single, monstrous mass, but it appears on beaches in stinky, sticky clusters.

The great Atlantic Sargassum belt, as scientists have dubbed it, was identified in a paper published in July in the journal Science. Researchers first spotted it via European Space Agency satellites in 2011, when the brown algae was observed growing in massive quantities. Almost every year since, the seaweed has bloomed in the summer, deposited seeds in the winter and repeated the cycle when temperatures started to rise again. Though summer 2018 saw the largest stretch of seaweed on record — roughly 5,500 miles long — this year’s mass wasn’t much smaller. And research suggests the bloom isn’t going to die down anytime soon.

The stinky seaweed Sargassum has been forming a massive mat across the Atlantic — and washing up on shores — each summer since at least 2011. Researchers published their first full report on the brown algae in July 2019, when the belt was still going strong. (Credit: Mengqiu Wang)

What caused this stretch of seaweed to get so big in the first place? Clues point to fertilizer runoff from the Amazon River and an upwelling of nutrients from deep waters off the coast of West Africa. Fluctuating ocean temperatures, salinity and nutrient contents also may have played a role. But the Science study ultimately left open the question of cause, and its authors will continue analyzing the seaweed in 2020.

While no simple answer can explain the growth, scientists are calling the sizable recent blooms the “new normal.” As for your summer vacation, plan for the possibility of lots and lots of Sargassum when you’re sunbathing on the coast.