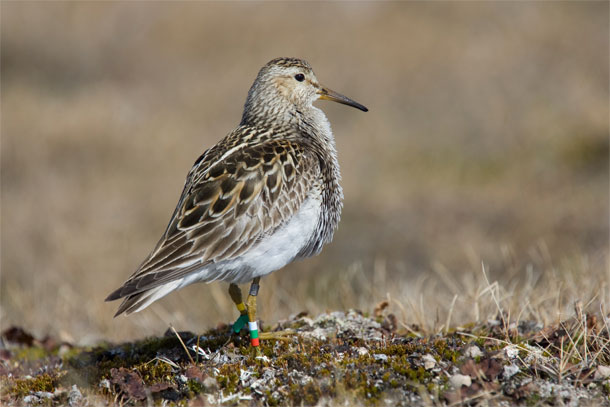 It’s June in the Arctic tundra, and male pectoral sandpiper hasn’t slept for weeks. He’s too busy trying to have sex. The females will only be fertile for three short weeks, and they’re very choosy. A male has to spend his time chasing the females and displaying with his puffed-up breast, while fighting off rivals and maintaining control of his territory. With so much at stake and so little time, there is simply no time for sleeping. You might have thought that this constant activity would take its toll on the male. Sleep, after all, is important for our physical and mental wellbeing. Males who go without it for too long should be too tired and addled to make successful suitors. But not so - John Lesku from the Max Planck Institute for Ornithology found that the males who slept the least actually sired the most offspring. Lesku’s study complicates our understanding of sleep, which was already pretty complicated. For an activity that we all do, we still don’t fully understand what sleep is for. One hypothesis says that sleep has active benefits. It helps the brain to recover from the excesses of a day spent awake, and gives us time tostrengthen the memoriesthat we’ve made. There are dozens of studies, in humans and other animals, which support this idea. The alternative is that sleep is state of “adaptive inactivity”. It’s a way of saving energy when it’s not needed. Animals that sleep for longer are those that can afford to. That is the hypothesis that Lesku has tested and confirmed, at least in the sandpipers. The pectoral sandpiper breeds in the Arctic, at a time when the sun never sets. The male plays no role in raising the chicks, so his success at passing down his genes depends entirely on his ability to mate with females. That means fighting, competition and courtship, for as long as he can manage. Lesku’s team studied a group of these birds and used radio trackers to automatically record the activity of almost every male in the area, along with a smaller sample of females. You can see how they behaved in the diagram below. Each row represents a day. The yellow ones show when females were fertile, while orange rows represent infertile periods.

You can clearly see that the males are much more active than the females throughout the breeding season. If sleep happened, it was a precious commodity. One particularly adventurous male stayed awake for more than 95 percent of the time for 19 days straight! By measuring the males’ brain activity with electrodes, Lesku found that they compensate for their lack of sleep by entering it almost instantly when they stop moving, and by sleeping more deeply. That would have been little solace since their total hours of slumber were still so restricted and fragmented. And yet, the males didn’t seem to suffer. Those who slept least also interact with the most females, and sired the most chicks. Perhaps the sleepless males did better in one year, but suffered for their recurrent all-nighters later? Again, that wasn’t the case. Lesku found that the most successful males – that is, the most sleep-deprived ones – were also 10 percent more likely to return to the breeding site in the following year. And when they came back, they were still better at fathering chicks than the males that didn’t forgo as much sleep. Lesku’s results strongly support the “adaptive inactivity” hypothesis, but they don’t contradict the “restorative function” one either. Indeed, the sandpipers that got by on the least sleep may have had genetic advantages that allowed them to cope, without the hit to memory, attention, and so on. That would also explain why they don’t suffer any long-term problems for their sleepless nights, and can carry on with the same strategy year after year. Reference: Lesku, Rattenborg, Valcu, Vyssotski, Kuhn, Kuemmeth, Heidrich & Kempenaers. 2012. Adaptive Sleep Loss in Polygynous Pectoral Sandpipers. Science http://dx.doi.org/10.1126/science.1220939Image by MPOI, Bart Kempenaers.