Specific language impairment (SLI) is a language disorder that affects growing children, who find it inexplicably difficult to pick up the spoken language skills that their peers acquire so effortlessly. Autism is another (perhaps more familiar) developmental disorder and many autistic children also have problems in picking up normal speech and communication. These two conditions have a common theme of language difficulties running through them, but a new study reveals a deeper connection - both are linked to a gene called CNTNAP2. 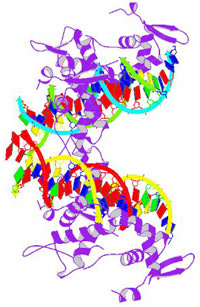 The story of CNTNAP2 actually begins with another gene, whose name will be familiar to anyone with a passing interest in the genetics of language - FOXP2. Earlier this year, I wrote a long feature on the history of FOXP2 for New Scientist, but here's a potted version.

FOXP2 was catapulted into the limelight earlier this decade when it became the first gene to be linked to an inherited language disorder. Initially heralded as "a language gene", the hype surrounding FOXP2 was soon pierced by a number of studies which showed that the gene is an ancient one - it is present in a variety of different animals and has changed very little over the course of evolutionary time. In other species, it is hardly involved in language and in some, it isn't even involved in communication.

The latest evidence suggests that FOXP2 affects the learning and production of complex sequences of movements. Such sequences are, of course, crucial for speech so it's understandable that faults in FOXP2 leads to linguistic difficulties. So much for the hype, but the FOXP2 story isn't over yet.

One of the most interesting things about it is that it's a 'transcription factor', an executive gene that controls the activity of several subordinates. It was the quest to identify the genes that FOXP2 lords over that led to CNTNAP2. And lo and behold, it too plays a role in language.

The discovery was made by a group from the University of Oxford led by Simon Fisher, the scientist who first demonstrated FOXP2's involvement in language disorders. Sonja Vernes from Fisher's lab began by looking for areas of human DNA that the FOXP2 protein sticks to.

One of these regions piqued their interest for it lay within CNTNAP2, an extremely compelling candidate for a language-related gene. Previous studies had shown that CNTNAP2 is switched on in nerve cells and affects the connections between these cells. It is involved in the development of the brain and its levels are particularly high in neural circuits that are involved in language. And faults in the gene had been linked to other conditions including Tourette's syndrome and autism.

Vernes found that FOXP2 switches off CNTNAP2, for parts of the developing brain with the highest FOXP2 activity also have the lowest CNTNAP2 activity. The team went on to sequence the gene in members of 184 British families with a history of specific language impairment. They assessed the language abilities of each child with a battery of tests, including one that analysed whether they were able to repeat made-up words. It seems like a strange test, but children with SLI do characteristically badly at it.

Vernes's group identified nine different versions of CNTNAP2 that affected a child's language abilities, each differing from the normal one by a single change within a relatively narrow section of the gene. Some of these variants cropped up in groups and one such combination, known as ht1, had a particularly strong influence on language skills. Children who carry one or two copies of the ht1 version of CNTNAP2 score much lower on the nonsense-word repetition test than their peers who lack any such copies.

These results are a big step forward in understanding the genetics of language. For a start, it's the first time that faults in a specific gene have been linked to a common type of language impairment. The defect caused by faulty FOXP2 is very rare and SLI on the other hand affects 7-8% of preschoolers. That the gene is also implicated in autism just makes it that much more interesting, especially since the group took great pains to ensure that autistic children were excluded from their study, so as to avoid biasing their results.

Some variants of CNTNAP2 affect the length of time it takes for autistic children to develop language skills. And amazingly, both these variants and those implicated in SLI are the result of genetic changes within the same section of the gene. So faults in this single gene contributes to language problems that are shared by both SLI and autism.

Finally, the new study is a sign that the true promise of FOXP2's discovery is being fulfilled - the gene itself has been overly hyped, but its true worth lies in opening a door for more research into genes involved in language. It was the valuable clue that threw the case wide open. CNTNAP2 may be the first language disorder culprit revealed through FOXP2 but if Fisher's team have anything to say about it, it certainly won't be the last.