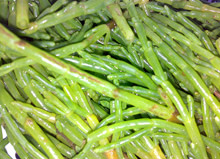 "We have limited amounts of freshwater - most of it is used for drinking water. Gradually it will be profitable to think of brackish water and sea water as a resource." ... The scientists suggest the best way forward is to domesticate wild plants, crossbreeding them to produce higher yields [BBC News].

Researchers points to edible plants like sea kale and samphire (sometimes called sea asparagus) as likely candidates for domestication, as both grow happily amid the sea spray. In the Netherlands, researchers have experimented with growing sea kale as a crop in coastal areas, and their results have been a hit at one island restaurant.

“It has a stronger flavor than most vegetables but brings out very nice accents in food,” [restaurateur Jef] Schuur said. “Growing sea kale here shows that there are a lot more opportunities for local produce on low-lying islands affected by salt” [Bloomberg].

Writing in the journal Science [subscription required], the researchers explain that all

plants evolved in salt water 3 billion years ago and most lost their ability to grow in soils or water with high concentrations of sodium and chlorine, the two elements that form salt, about 450 million years ago.... Only about 1 percent of land-based plants, including beets, dates and pomegranate, can grow in salt-rich environments [Bloomberg].

Many researchers have tried to genetically modify conventional crops like wheat and rice to make them more salt-tolerant over the past 30 years, but have had no success thus far; the genetic manipulations required appear to be too complex. With that line of research thwarted for now, researchers say it's time to focus on the plants that naturally tolerate salt, called halophytes. These plants could also be grown for biofuel, researchers note, as some grow very quickly and have oily seeds.

The Science authors note that one leading halophyte-candidate, Salicornia bigelovii, produces 1.7 times more oil per acre than sunflowers, a common source of vegetable oil. "[Some halophytes] yield even more than things like switchgrass and they'll be grown on land that's just not used right now" [Wired News]