Swimming in large schools increases competition for meals, but it’s a price salmon pay to avoid becoming one themselves. 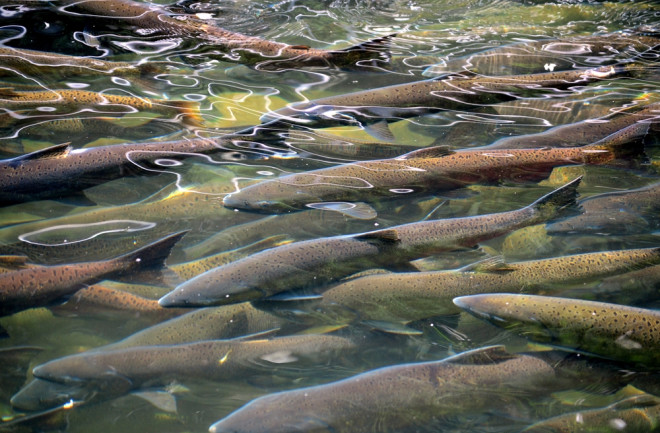 To test if large fish schools reduced predation risk, the researchers gathered four decades of data from purse seines — large curtains of netting that fishers use to cinch in fishes. They measured fish age, size and abundance, and they also documented predation wounds and stomach fullness. This gave the team insights into group size, group composition, predation risk and feeding competition. All in all, their data set included 16,000 fishes from four pacific salmon species.

Predators are less likely to ambush fishes living in larger groups. Predation risk halved with every 100 individuals added to the group.

It also paid to blend in with the rest of the school. Predators targeted the groups that had a mixed bag of fish sizes, and they singled out the smallest and biggest individuals.

Skipping a meal is the price salmon pay to avoid becoming one themselves. There will always be a chance to eat, the researchers say, but a single attack from a predator could be the difference between life and death.

The fishers who collected the data documented predators in the nets and nearby. Marine mammals, including whales and seals, swam close to the seines, and 57 percent of the catches also included fish predators like sharks and dogfish.

Only three percent of pink salmon and 13 percent of sockeye salmon survive to make their final migratory breeding journey towards their natal streams. When the whole ocean is out to eat you, it pays to find some friends.

Andrew Berdahl, co-author on the study and assistant professor at the University of Washington, says in a press release that he hopes the study “motivates people to think about the ecological implications of collective behavior — in this case, how grouping impacts the food web.” The authors hope that managers at fisheries consider group size in conservation plans for the declining salmon species.