The lizard-like amphibians are bioindicators of climate change. But their ability to adapt to changes in the landscape may astound you. 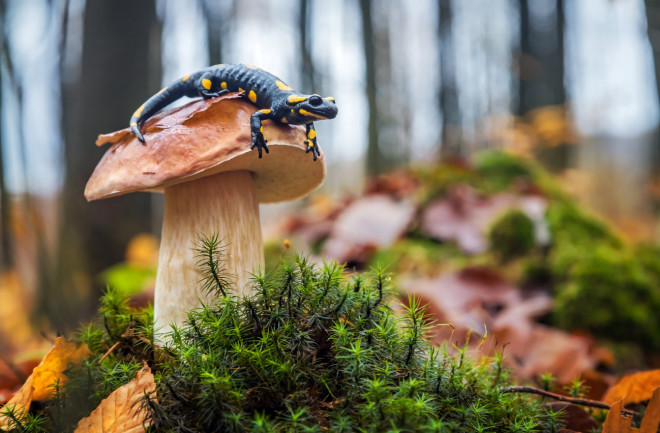 Most salamanders go largely unnoticed by humans due to their small size and secluded habitats. The soft-bodied hermits spend their days underground, in water or under the cover of moist leaves — rising only during the most temperate times of day and at night to feed. Chances are, unless you enjoy hiking under the cover of darkness, you’re largely unaware of their presence.

But salamanders, among other amphibians, play a very important role. Because these cold-blooded creatures have such specialized ecological niches, many of which are threatened by Earth’s warming climate, they're considered bioindicators of climate change.

Salamanders live both terrestrial and aquatic lives. Their habitats range from moist forest floors to subterranean deserts and they emerge to mate only once a year — often in vernal pools, which form from rainwater that swells in temperate seasons and disappears in the midsummer heat. Global warming has caused many of their habitats to dry out, making the lands they once knew inhospitable. Today, more than 40 percent of salamander species are threatened in the U.S. alone.

The Pressure to Adapt

Salamanders who can’t remain in their established habitat may move into other niches, exposing themselves to new terrain and new environmental pressures. Salamanders in Appalachia, for example, currently face decreases in suitable survival domains. Unfortunately, not every salamander can survive a move.

Some salamanders survive through surprising adjustments. Shifts in their immediate surroundings often coincide with changes in salamander physiology and morphology, or body structure. For instance, salamanders subjected to unusually dry and hot conditions have shown decreased body size over the last half century. Interestingly, scientists determined that these changes in morphology are directly related to adaptations in the number of vertebrae salamanders possess from generation to generation.

Where water is scarce due to drying, desertification and lack of humidity, salamanders have adapted to need less water. Some species develop a mucousal membrane that allows them to maintain body temperature without the assistance of external water sources. Still others manage to shut down their bodies in a pseudo-hibernation phase; once unfavorable conditions pass, the salamanders return to their waking state. In this way, they manage to live out their life cycle and reproduce despite the odds.

Scientists attribute these abilities to an evolutionary process called plasticity, a change organisms undergo in direct response to stressors in their environment. Unlike evolutionary adaptations, plasticity occurs within the span of the organism’s lifetime. Salamanders seem to have a hold on plasticity, with the ability to morph and change very quickly.

Their fantastic longevity also provides clues to understanding aging and regeneration within humans. By studying salamander molecular biology more closely, researchers can bring more salamander offerings into our own realm that could prove worthy additions, such as in cancer studies.

In fact, salamanders have a lot to offer. For one, they are considered a keystone species — other organisms rely on the them, and their disappearance in an ecosystem causes drastic change. Salamanders are one of the largest food sources for other invertebrates, for instance. In some places, the lizard-like animals make up a huge part of entire forest populations, rivaling even white-tailed deer in number.

Salamanders also regulate food webs, promoting resilience in their ecological niche. Their extinction correlates directly with increased populations of pests that are left to proliferate when there are no salamanders to eat them; these increased pest populations lead to environmental degradation. Salamanders also contribute directly to soil biotics by secreting valuable micronutrients from their skin to the earth as they burrow underground.

One of the prominent questions climate researchers have is whether carbon dioxide emissions might be mitigated by salamanders through a process called carbon-storing. In leaf-littered woodland floors, salamanders maintain carbon stores which would otherwise be released into the atmosphere and contribute to greater warming of our climate.

What’s more, when salamanders are gone, we lose a link they maintain between the earth and its waterways. Their contribution to headwater stream maintenance is one of the most important offerings they (unwittingly) make to the human world. The health of our major waterways — rivers, lakes and streams — emanates directly from headwater stream health, and these waterways feed into underground aquifers that supply clean drinking water to humans.

There’s still much that scientists don’t know about these slippery, little hermits. As we learn more, we might find that salamanders are some of the little things that run the world.