From food webs to carbon sequestration, salamanders have a big impact on their ecosystems. 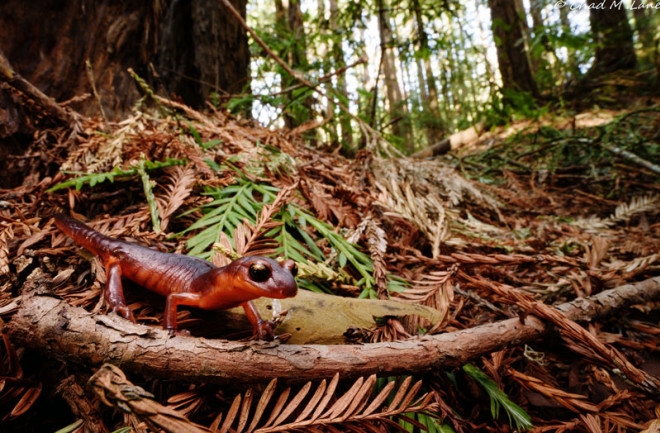 From coast to coast, salamanders are so abundant that they can influence ecosystems. This Ensatina, common in the West, crawls across a redwood forest floor in Alameda County, California. (Credit: Chad Lane)

On a drizzly December afternoon in western Massachusetts, U.S. Geological Survey wildlife biologists Evan Grant and Adrianne Brand stop their car on the side of the road and plod into the wet forest through a break in the oaks and white pines. It’s a bit late in the year to find the predators they’re searching for, but this forest is teeming with them. In fact, as soon as they walk past the first tree, they’re probably never more than a few feet from a salamander.

You’d never know it, though.

If you walk into almost any forest, like this one in the northeastern United States, and stand still, you’ll start to hear animals. At first, the songs of birds from afar will reach you. Then, the ones nearby that went silent at your approach will start back up. After a while, you might hear some rustling in the leaves nearby: chipmunks, squirrels or other small mammals, and maybe a snake or two. But as long as you stand, and as silent as you may be, what you’ll never hear — and probably never see — are these predators, the most common terrestrial vertebrates in the woods.

Fortunately, unless you’re a small bug, you’re not in any danger. The ubiquitous critters are eastern red-backed salamanders: skinny, lungless amphibians a couple of inches long with a rust-colored racing stripe down their backs. And in forests from Nova Scotia to Minnesota and down south to North Carolina, there are often more Plethodon cinereus than any other land animal with a backbone. Their sheer weight is greater than all the nearby birds and small mammals combined. From the East Coast to the West, those tremendous numbers are showing scientists just how important salamanders are to the forests that surround them.

If you are an insect, red-backed salamanders should indeed strike fear into your ... open circulatory system. Their voracious nature and their numbers make these salamanders crucial parts of the forest food web, according to Cari-Ann Hickerson, who studies the small amphibians at John Carroll University in Ohio.

“They have the ability to create trophic cascades in the forest that filter all the way down to the level of the leaf litter,” says Hickerson, referring to the predators’ ability to shape populations beyond those they directly feed on. By eating the bugs that eat or break down dead leaves, salamanders can alter the flow of nutrients and chemicals on the forest floor. And they keep prey populations under control, maintaining a balanced food web.

Since 1975, scientists have known about the staggering numbers of red-backed salamanders living under rocks, logs and leaves. That year, a study in New Hampshire estimated there were about 750,000 salamanders per square mile, or about one salamander for every 6-foot square of forest floor. But researchers’ techniques, typical at the time, weren’t up to modern standards.

So in 2014, University of Missouri herpetologist Ray Semlitsch re-evaluated salamander populations. He was inspired after discovering that salamander populations in the Ozarks were significantly higher than the 1975 estimates. His team eventually found that the density nationwide — in forests where salamanders live — was, on average, eight times higher than what scientists reported in 1975.

These woodland salamanders are also out West. Ensatina eschscholtzii, usually just referred to as Ensatina, lives in forests from British Columbia to Baja California.

“I like to think of them as the stewards of the forest,” says biologist Michael Best of College of the Redwoods in Northern California. He’s studied Ensatina for over a decade, and in 2014, found that one salamander in an outdoor enclosure could slow down leaf decay by about 15 percent.

The implication? These salamanders could sequester 80 tons of carbon on the forest floor every year. That’s equal to a car driving 650,000 miles. And overall, salamanders create stability on the forest floor, Best says. The amphibians stash nutrients, both in their bodies and in the leaves whose decomposition they slow down, and keep the nutrients around until other organisms can use them.

“They are moderating the swings of chaos,” Best says.

There are some caveats to these findings. Food webs are almost endlessly complex, and not all studies on salamanders have shown such huge ecosystem effects. But Daniel Hocking of Frostburg State University in Maryland says that with over 5,000 salamanders in an area the size of a football field, “it’s hard to imagine they’re not having any influence on food webs and ecosystems.”

Such a widespread species is not in danger of extinction, but there are troubling signs. Invasive earthworms seem to be pushing salamanders from their preferred habitat in some Ohio forests, says Hickerson. And there’s the recently discovered salamander-killing fungus called Bsal (short for Batrachochytrium salamandrivorans), which researchers worry could spread to the U.S. from Asia.

And, of course, there’s climate change. Grant, the USGS amphibian researcher in Massachusetts, is part of a network of researchers throughout the red-backed salamander’s range hoping to figure out how they will adjust. Climate change models predict reduced snowfall. Without that insulating layer, deeper forest floor layers may freeze when extreme cold sweeps down from the north, Grant says. That could force salamanders to burrow deeper in the soil, delaying their emergence in the spring.

To emulate this, Grant has been going into forests and shoveling off snow from grids of wooden boards, under which salamanders love to hide. Keeping half the boards snow-free in winter, and leaving the other half snowy as an experimental control, can show him how the salamanders might fare in coming decades.

Grant and Brand are checking those boards on this December day. Brand flips a board over and calls out that she’s found one. It’s a young red-backed salamander — probably less than a year old, Grant estimates, and just an inch long from nose to tail tip.

Its large, dark eyes bug out from a flattened head covered in faint pale dots. It seems impossible that something so tiny could make any difference to the enormous forest surrounding it. But its power sinks in when you start to realize that it’s part of an elusive army, tens of millions strong.

This article originally appeared in print as "The Salamander Army."