Running Made Us Human: How We Evolved to Run Marathons 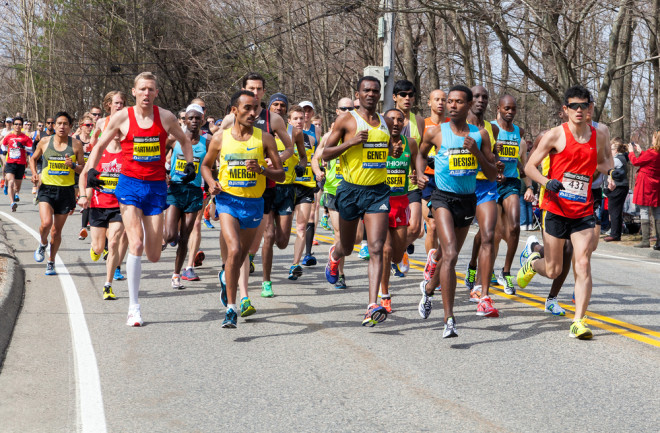 Runners taking part in the Boston Marathon. (Credit: Marcio Jose Bastos Silva/Shutterstock) This Monday the 123rd annual Boston Marathon will take place, with an expected 30,000 participants and a half million spectators. The top finishers should complete the grueling 26.2-mile course in just over 2 hours by clocking a pace of under five minutes per mile. I know. It’s painful to imagine. Most of us couldn't maintain that speed for one mile — forget 26 of them. But take heart, recreational runners of the world. Your endurance abilities are actually extraordinary, when compared to the rest of the animal kingdom. True, other creatures boast greater strength, agility and raw speed. Homo sapiens are relatively pathetic athletes by all measures. But when it comes to long distance locomotion, we're remarkable. After 15 minutes of sustained running, fit humans can outlast nearly all mammals, especially in hot weather. That's more than a useful tip for betting on a hypothetical Interspecies Marathon (or the actual Man vs. Horse Marathon). Rather, it’s the basis for an important idea in human evolution studies. Let’s call it the “running made us human” hypothesis: According to some scientists, distance running was key to our ancestors’ evolutionary success. They say adaptations for endurance allowed early members of the genus Homo to hunt long before the invention of complex weapons. Regular access to meat spurred brain growth, and ultimately, humanity as we know it.

How Running Made Us Human

The role of running in human evolution has been most intensely investigated by Daniel Lieberman, a Harvard University evolutionary biologist and 9-time Boston Marathon runner. Lieberman and others hypothesize that roughly 2 million years ago Homo erectus ancestors, armed with sharpened sticks and stones, were able to kill prey by persistence hunting. This strategy, practiced in some recent forager societies, entails pursing a tasty herbivore in midday sun until the animal collapses from exhaustion and heat stroke. Hunters can then finish it off with simple weapons. This scenario could solve a major puzzle in human evolution: how did Homo erectus get meat? Researchers assume these hominins hunted because archaeological sites, between 2 and 1 million years old, have yielded plenty of butchered animal bones. Yet stone tools back then were hefty implements, like the Acheulean handaxe — technology better suited for processing carcasses than impaling moving targets. Projectile weapons, like the bow and arrow, were probably not invented until the past 80,000 years. It’s hard to imagine handaxe-wielding hominins catching much prey, especially since they would have been competing with lions, hyena and other African carnivores. But persistence hunting might have been the secret. To avoid overheating, most predators forgo hunting during the hottest hours. Humans — and potentially earlier Homo species — can handle heat thanks to adaptations such as furless bodies and increased sweat glands. Around high noon while most carnivores napped, human ancestors could have hunted by persistently chasing and tracking prey.

Proof of Their Persistence

Ethnographic studies have noted persistence hunts in some recent hunter-gatherer societies, including Kalahari Bushmen, Aboriginal Australians and Native American groups in the American Southwest and Mexico. A 2006 Current Anthropologypaper provided the first real data on the matter, based on 10 persistence hunts in the Kalahari of Botswana (one was filmed for David Attenborough’s docu-series Life of Mammals). These hunts, which were successful five out of 10 times, lasted up to 6 hours and covered 10-20 miles in temperatures over 100°F. During the chases, prey would sprint ahead in short bursts punctuated by resting bouts. Meanwhile the humans slowly and steadily pursued, averaging paces of 9.6 to 15 minutes per mile. Though the hunters periodically lost sight of the animal, signs like footprints and indented grass indicated its path. The ethnographic studies prove that persistence hunting works, but only in hot, grassland-like environments. Even then, the practice is rare among hunter-gatherers today. To some anthropologists, these points are enough to refute the hypothesis. They argue that persistence hunting is too uncommon, and effective in too few habitats, to have been an important force in human evolution. Otherscounter that just because the strategy is rare today it doesn’t mean that was the case 2 million years in our ancestral environments.

So let’s say that human ancestors did run down their prey. What is the evidence that Homo erectus was the first species to embrace this strategy? In a 2004 Nature paper Lieberman and biologist Dennis Bramble, now an emeritus professor at the University of Utah, identified skeletal features in hominin fossils that indicate running abilities. These include a narrow pelvis, short toes, expanded attachment for the gluteus maximus (butt muscle) and large semicircular canals, fluid-filled ear chambers that help us stay balanced while moving. Most of these adaptations for running appeared around 2 million years ago in the species Homo erectus, rather than earlier hominins such as the Australopiths. This suggests H. erectus was the first endurance athlete in our lineage. But certainly not the last, as the Boston Marathon's 30,000 competitors will remind you.