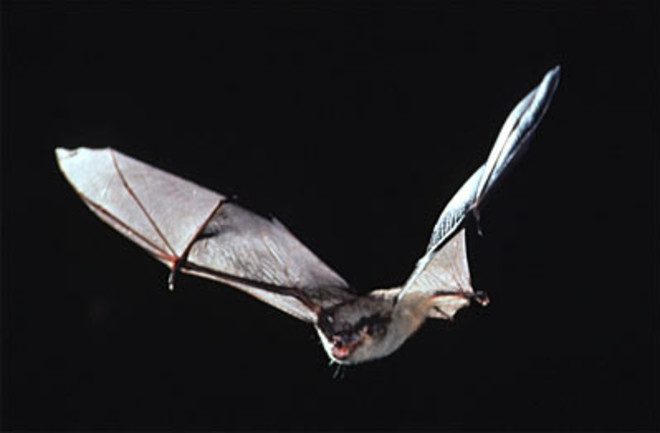 Bats have microbiomes that look very different from those of other mammals. Researchers think it could be related to flying. (Credit: USFWS)

Just like dissection can reveal important information about animal structure and morphology, so can attempting to recreate and mimic aspects of animals with robotics.

That's the approach of a group of researchers at Brown University, who have developed a robotic wing to mimic a bat wing in flight. They are using this wing to measure the aerodynamics of a bat's flight, results which may someday help us build better flying machines.

The Complexity of Wings

Bats have very different wings than flying insects and birds, and their wings are correspondingly more structurally complex. Bat wings make their owners capable of commuting and migrating long distances, carrying heavy loads, flying fast, and being able to fly in narrow spaces like between trees.

Their wings have up to 25 actively controlled joints and 34 degrees of freedom. By comparison, the human arm is said to have 7 degrees of freedom. Bats use their elbows and wrists in flight, in combination with a shoulder equipped with tons of muscles for three dimensional rotation. They also use their hindlimbs, back feet and fingers to control the overall shape of the wing and the angle of flight.

Bats' wing membranes are able to stretch and recoil with changes in wing fold, and the skin of the membranes are attached all along the side of the bat’s body from neck to ankle. The membrane skin that stretches between their adapted digits is much thinner than the skin of similarly small non-flying mammals, and bats put that skin to the test across a much larger range of expansion and contraction than most mammals put their skin through. This skin flexibility allows bats to vary their motions in flight and to use the skin like a parachute to passively capture air during flight.

In order to deal with the incredible complexity in bat wing motion for the purposes of creating a model of the wing, the researchers chose to focus on a joint arrangement using just seven of the twenty-five possible bat wing joints. They created a wing that could actively fold and expand just like a real bat wing, but which was built to focus on the effects of flapping wings on aerodynamic force.

The Importance of Making Mistakes

Making a robotic bat wing requires both biology and engineering. Joseph Bahlman, lead author on the study and a PhD candidate in biology, says he finds himself learning how to be an engineer. And sometimes, in that engineering process, building structures that don’t work is more informative than building structures that do. When we can see something is missing, that one of these things is not like the other, it informs what the variables are more clearly.

Creating a model of nature is like the process of evolution on speed. Baba Brinkman, the evolution rapper, tells us that science (and evolution) is about performance, feedback, and revision. The scientists got plenty of feedback from their robot — the wing skeleton broke frequently at the elbow, a pressure that bats must contend with in the wild; the researchers dealt with this by wrapping steel around the elbow to mimic the ligaments of a biological joint.

They determined that ligaments probably play a role in preventing breakage at the elbow in nature, as do muscles. The bat's fused forearm muscles may help prevent its elbow dislocating in flight. The researchers also struggled with tears in their wing membrane, which taught them the value of the loose connective tissue that most vertebrates have between the skin and underlying muscles and bones.

They mimicked this tissue by creating an intermediate network of elastic fibers connecting the membrane tissue and the skeleton, which reduced tearing considerably. A potential ramification of this research is to create "micro air vehicles," bat-sized planes that can be used for surveillance and research.

In the more immediate term, though, it tells us a small bit more about the astounding complexity of bat flight — all the more able to be appreciated in the video below.