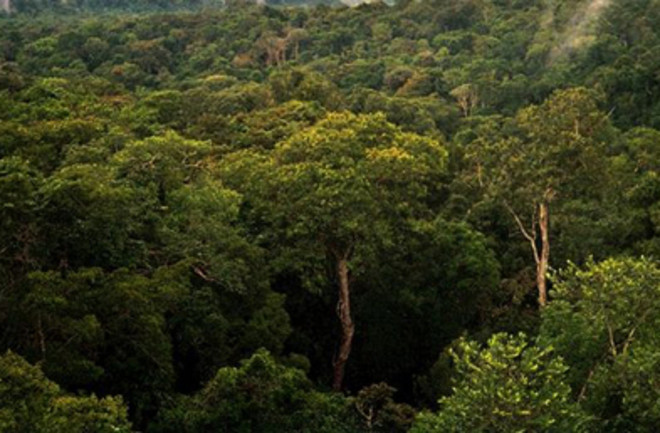 What does it take to make a wellspring of biodiversity like the Amazon rainforest? A huge mountain range, a blast of heat, and a little time. A pair of studies in this week's edition of Science attempt to sort through tropical natural history and reach the root causes of Amazonia's embarrassment of biological riches. The first, led by palaeoecologist Carina Hoorn, points to the influence of the Andes Mountains, the spine of South America that runs up its western coast. Sometime between about 35 and 65 million years ago, colliding tectonic plates sent the Andes bulging up. According to the researchers, the birth of a mountain range set of an ecological chain reaction.

The rising mountains that resulted from the uplift blocked humid air from the Atlantic, eventually increasing rainfall along the eastern flank of what became the Andes that eroded nutrient-loaded soils off the mountains. The Andes also kept water from draining into the Pacific, helping form vast wetlands about 23 million years ago that were home to a wide range of mollusks and reptiles. [LiveScience]

About 7 million years ago those wetlands dried up. But they left behind a swath of fertile soil, the scientists say, perfect for a rainforest to colonize. A little later, about 3.5 million years ago, the Panama isthmus emerged, and that sliver of land provided a bridge for even more species to reach the Amazon. And then there's the heat. A little than 56 million years ago—during the window when the Andes commenced their ascent—a blast of sudden warming struck the Earth. The event is called the Palaeocene-Eocene Thermal Maximum (PETM)

, during which the temperature shot up by as much as 5 degrees Celsius (9 degrees Fahrenheit) and the global thermostat stayed there for about 200,000 years. One might think that a temperature shock would suppress biodiversity, but that is not what the scientists found in the fossil record when they surveyed in Colombia and Venezuela.

“We were expecting to find rapid extinction, a total change in the forest,” says study leader Carlos Jaramillo, a biologist at the Smithsonian Tropical Research Institute in Balboa, Panama. “What we found was just the opposite — a very fast addition of many new species, and a huge spike in the diversity of tropical plants.” [Science News]

Indeed, this warm period invited some of the Amazon

The pollen fossil record shows that some important plant families, such as Myrtaceae, which includes eucalyptus, and Passifloraceae--the passion flowers--made their first appearance during the thermal maximum. The tropics have remained the most species-diverse area of the world ever since. [Scientific American]

On the surface, this burst of biodiversity during a warm spike might suggest plants actually could thrive if the planet suddenly heats up. But Jaramillo—admittedly wary that his study of the Earth 56 million years ago will be used as ammunition to argue that modern climate change doesn't matter—warns that this connection is far from clear. First, 200,000 years is hasty on the geological time scale, but global warming is happening at a much faster pace. Furthermore, he says, Earth was wetter during the PETM that it's likely to be in the near future, and deforestation has rendered the rainforest thinner today that it probably was then. Related Content: DISCOVER: Black Gold of the Amazon

DISCOVER: On the Origin on (Amazonian) Species

80beats: Amazonian Mega-Storm Knocked Down Half a Billion Trees