The Andes Had a Teenaged Growth Spurt 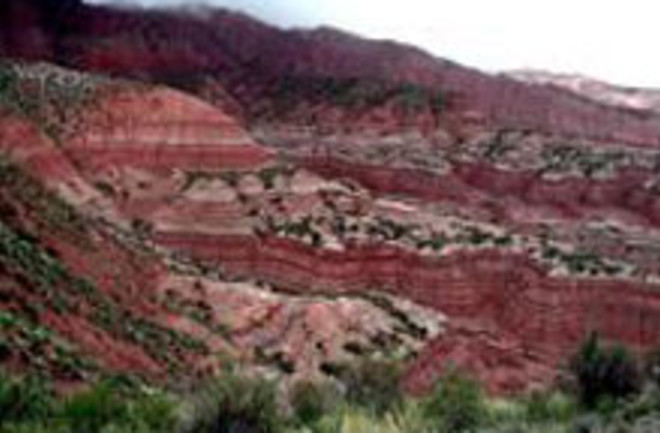 According to conventional wisdom, the towering Andes were formed slowly and gradually over 40 million years, as two tectonic plates gradually collided and buckled the earth's surface. Now a new study is revising that theory, and proposing that the mountain chain burst upwards in a growth spurt between 10 and 6 million years ago, a mere blink of an eye in geological terms. The new research doesn't dispute that the mountain range was formed in the collision of two tectonic plates — the dense Nazca Plate that underlies the Pacific Ocean and the lighter South American plate. But it adds a twist, saying that at one point during the long crash the mountains were suddenly freed of a heavy load and shot upwards towards the heavens. Researchers from the California Institute of Technology focused on a mountain region on the border between Bolivia and Peru, which has an average elevation of 12,500 feet. When team leader John Eiler found marine sediments in rocks high up on the mountain sides, he realized that those rocks sat just below sea level about 65 million years ago. The researchers then analyzed the sediment that was deposited in geological basins in the region over millions of years.

[The team] used a newly developed technique that interprets chemical signatures from isotopes of oxygen, carbon, and other elements in ancient soils to determine the history and rate of elevation rise. The ratio of isotopes varies depending on what elevation ancient precipitation fell onto the mountains. Other data allow the researchers to determine when the rain or snow fell [National Geographic News].

The results, reported in the journal Science [subscription required], showed a gradual rise in elevation until 10 million years ago, when it gained one and a half miles in height.

Why the sudden change in elevation? Eiler and his colleagues suggest that a large mass of dense rock that often forms at the base of Earth’s crust — a type of rock called eclogite — detached beneath the Andes and then sank into the mantle. Relieved of that weight, the overlying, relatively light continental crust bobbed upward like a cork, thereby raising the mountains [Science News].