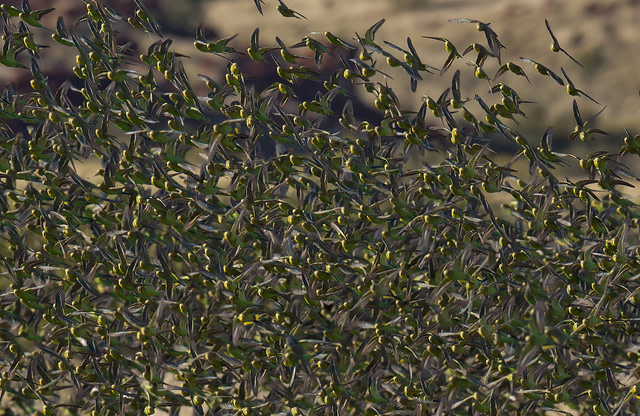 As they scrub the smeared ink from their wrists yet again, left-handed people must sometimes wonder what the point of all this is. Why do we have a dominant hand, anyway? However arbitrary it seems, we're not alone in favoring one side over the other—there are all kinds of animals with a preferred paw, claw, or swimming direction. Now flying birds have flapped into the club. In at least one species, birds tend to veer one direction over the other when faced with an obstacle. More than just a pointless impediment to scissors use, "handedness" in birds might keep their flocks flying. The birds in question are budgerigars, or budgies. Better known to Americans as ordinary pet parakeets, in Australia these birds travel the desert and scrubland in dense flocks. University of Queensland neuroscientist Mandyam Srinivasan says that flying this way without crashing isn't a trivial task. "Whilst landing on a tree, for example, it would be important to find a clear path," he says, "as well as avoid collisions with other birds." To study how flying budgies avoid obstacles, Srinivasan and his colleagues brought a group of birds into the lab. One at a time, the birds flew through a tunnel. Halfway down the tunnel their path was blocked by a cloth wall with two vertical slits; they had to choose one to fly through. Between the gaps was a sliding panel that let the scientists shrink one gap while widening the other. When the panel was perfectly centered, the birds saw two 5-centimeter gaps in the wall. While they made this flight again and again, the researchers shifted the center panel one centimeter at a time, so that the birds encountered gaps ranging from 0 to 10 centimeters. (To get through a narrow space, budgerigars tuck in their wings and make themselves into bullets.) In all, each bird made more than 100 flights down the tunnel. The scientists recorded how often each bird chose the left or the right gap to fly through. "Unfortunately, we had access to only five birds at the time of our initial study," Srinivasan notes. When one gap was much wider than the other, the birds usually picked the wider gap and the easier flight. But when the gaps were even or nearly even, four out of five birds showed a clear preference for the left or the right. Even though his study was limited to (almost literally) a handful of birds, "We are confident that our observation of individually varying biases is correct," Srinivasan says. In another recent study, he tested a larger number of budgerigars and found that they had strong preferences for the left or right when choosing a branch to perch on. Some studies with other bird species have shown that individuals prefer their right or left foot for picking up food or scratching their beaks. But Srinivasan is focusing on flight, and landing from flight, because he thinks it's where a right or left bias might actually help birds. The budgies in his study were an equal mix of righties and lefties. If a whole flock were evenly split between left- and right-swervers, this could make the tasks of flying through vegetation or landing on tree branches more efficient. For comparison, imagine the chaos in a fast-moving flock whose birds can't make up their minds, and veer from left to right as they approach a tree. Actually, you don't have to imagine—Srinivasan modeled this problem mathematically. He found that if a whole flock of budgerigars were passing through the barrier at once, their optimal strategy would be to have a mix of left-biased and right-biased birds, and for some birds' biases to be stronger than others'. It may be the case, Srinivasan speculates, that having a right or left bias is common in birds of many species. This strategy could help all kinds of flocks to fly well. "This has never been explored previously," he says; "we are just beginning to scratch the surface." Meanwhile, picking a side means the vibrant budgerigars can find a landing place without scratching each other's eyes out.