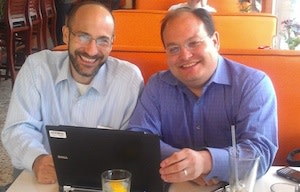 As I blogged yesterday, I have a story in the New York Times today about some scientists who are calling for a reformation of science, pointing to troubling indicators such as the rise in retractions of scientific papers. As any sane journalist would do, I consulted the fantastic Retraction Watch, written by Adam Marcus (left) and Ivan Oransky, while working on my own piece. I also called Oransky for his thoughts on the argument I was describing, championed by, among others, Ferric Fang of the University of Washington and Arturo Casadevall of Albert Einstein College of Medicine. Oransky was a huge help. But by the time my editor and I had shaped the story to fit in the paper, only a brief mention and a link to Retraction remained. Oransky's own opinions were left behind on the cutting room floor. Fortunately, he knows that floor very well, having swung the journalism scimitar plenty of times himself as the executive editor at Reuters Health. Even more fortunately, the Boston Globe has published some extended reflections from Oransky and Marcus on what retractions mean for the state of science. Check it out. [Image: Retraction Watch]