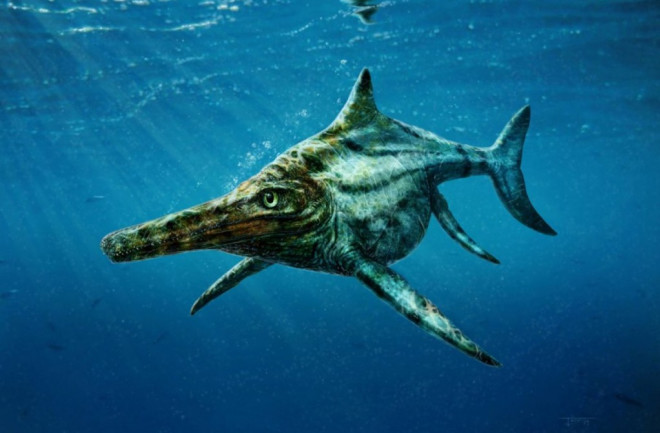 Dearcmhara shawcrossi, technically a marine reptile and not a dinosaur, is the first prehistoric aquatic species that's uniquely Scottish (Credit: Todd Marshall/PA) Researchers have verified fossil evidence of a massive sea beast that swam off the coasts of Scotland. And, no, this has nothing to do with the Loch Ness Monster. Or does it? After compiling fossil fragments collected over the past 50 years from Scotland’s Isle of Skye, paleontologists have identified a new species of marine reptile that was 14 feet long, lived 170 million years ago, and looked like a cross between an alligator and a dolphin. It’s the first marine reptile from Scotland to be discovered, studied and added to the scientific record, and it goes by the name Dearcmhara shawcrossi.

The Isle of Skye essentially serves as Scotland’s dinosaur treasure trove; it’s even called “Scotland’s Dinosaur Isle.” Although fossils are rare here, what is discovered makes an impact. The Isle of Skye is one of the few places where dinosaurs from the Middle Jurassic can be found, and the locale has yielded a number of record-breaking finds such as the world’s earliest ankylosaur-like dinosaur as well as the world’s smallest dinosaur footprint. But although the Isle of Skye is a prime source for Middle Jurassic fossils, there's a problem: amateur paleontologists often dig up specimens and keep them in private collections or sell them. As a result, many of Scotland’s prehistoric specimens simply don’t exist in the scientific record. It takes a bit of sleuthing and good luck to compile enough fossil evidence to identify new species that were native to Scotland.

Researchers identified Dearcmhara shawcrossi through the generosity of Brian Shawcross, who spotted the fossils lying on a beach in 1959. He donated the fragments of skulls, teeth and vertebrae in the 1990s for further study, and it’s only now that they are being identified. (And as a tip o' the hat, the new species was named after Shawcross.) D. shawcrossi is a new species of ichthyosaur, a type of marine reptile that lived during the Early to Late Jurassic. The beast enjoyed life near the top of the food chain, swimming in shallow, warm seas and tearing into smaller fish and squid with its set of sharp teeth. Paleontologists were able to identify D. shawcrossi with just four skeletal bones, which were unique enough from other ichthyosaurs to warrant its new species identification. Several other previously identified ichthyosaurs were also spotted in the batch of donated fossils. The discoveries, published in the Scottish Journal of Geology, will help paleontologists fill in some gaping holes in the evolutionary history of marine animals living during the Jurassic Period. If you were hoping to find a connection to the Loch Ness Monster here, we won’t leave you hanging: D. shawcrossi lived alongside another type of marine reptile, the plesiosaur, which is known for its long neck and flippers. Nessie is often portrayed as looking like one of these creatures.