The fish may have evolved the ability to see in color at depth by using rod cells instead of cone cells to detect light. 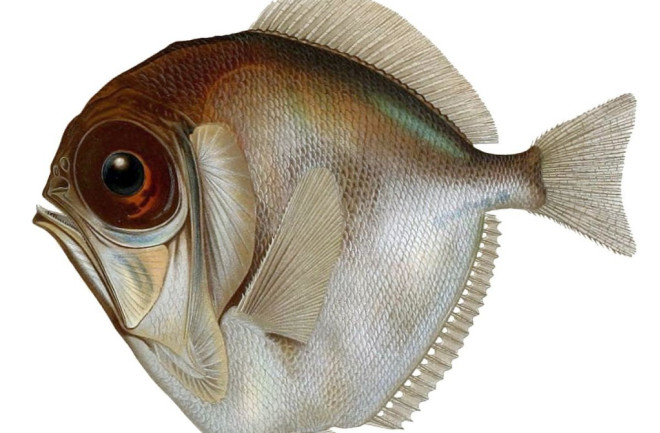 A drawing of a silver spinyfin. The fish was recently suggested to see in color even deep below the ocean. (Credit: Wikimedia Commons)

In the dim light of dusk, the world appears gray. That's because we, like most vertebrates, have just on type of rod opsin, the light-sensitive pigment in our eyes that lets us see in low light. During the day, a different set of pigments in cone cells pick up a broader range of wavelengths, giving us color vision. Now, an international team of researchers has discovered that fish living in the dark depths of the oceans nearly a mile below the surface may use rod opsins — which grant us largely black and white vision — to see color.

The finding redefines the current paradigm of vertebrate vision, the researchers say. “These findings mean that vertebrate vision is more complex than we initially assumed,” said Fabio Cortesi, a zoologist at The University of Queensland in Brisbane, Australia, who co-led the new work.

Vertebrates can see in color because we have multiple cone opsins that pick up different wavelengths of light corresponding to different colors — red, blue and green, for example. Rod cells, by contrast, use rod opsin and are responsible for night vision. Because most vertebrates have just one type of rod opsin that picks up only a narrow range of light, they are colorblind in dim light.

Cortesi and colleagues wanted to understand how animals besides humans see the world, so they turned to an environment starkly different than ours: the dim depths of the ocean. “No better place to look for it than in the deep-sea, where the environmental conditions are extreme in any way you can think of,” Cortesi said.

The researchers scrutinized the genomes of more than 100 fish species. The researchers included not only deep-sea fish, but also those living in shallower waters and everywhere in between. The analysis revealed some fish living at great depths have multiple genes for rod opsin.

Thirteen fish species have more than one gene for rod opsin and one species, the silver spinyfin, has a whopping 38, the team reports today in the journal Science.

“So far, no vertebrate species has been known to possess more than two copies of the light-sensitive rod opsin gene. And then comes the silver spinyfin with 38 copies of this gene!” said Zuzana Musilova, a zoologist at Charles University in Prague, who co-led the research with Cortesi.

The fish only express, or use, 14 of those genes. But it's still enough to give the silver spinyfin more rod opsin pigments than any other vertebrate.

It may also enable the fish to pick up bioluminescence, light that some deep-sea creatures emit in a variety of colors with wavelengths between 420 and 520 nanometers. Because the silver spinyfin has multiple rod opsins that detect different wavelengths of light, the discovery suggests these fish may have evolved the ability to see in color at depth using rod cells instead of cone cells. The scientists would like more evidence to back up this possibility, but say that if true, this would be the first case where rod cells provide color vision.

“The findings are shifting the paradigm of how we think about vision in vertebrates on a number of levels,” Cortesi said.“It suggests that the old paradigm of color vision using cones during the day and color-blind vision using a single rod during the night might not be as black and white in the end.”