Before being eaten by the wasp larvae, the spiders build them a cocoon for their metamorphosis. 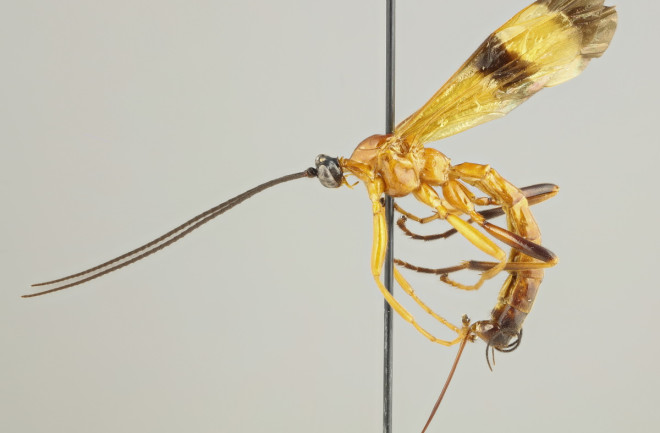 Researchers found 15 new species of a tropical wasp that parasitizes spiders, not only feeding them to their young, but also inducing them to spin cocoons for them. (Credit: Kari Kaunisto)

Polysphincta wasps might be pretty if they weren't so brutal. Native to the Americas, the larvae of these parasitic insects eat their host spiders while simultaneously controlling their minds, inducing the spiders to spin a cocoon the wasps will use to pupate into adults.

Researchers used to think that one group of these wasps, the genus Acrotaphus, consisted of 11 different species. But new studies of preserved specimens reveal that there are at least 15 more species of this nightmare parasite scouting the wild for their next victim. The newly identified Acrotaphus wasps are spelled out in the journal ZooTaxa.

“The biology of spider-attacking parasitoid wasps is very fascinating and at the same time cruel,” said study co-author Diego Pádua, an entomologist with the National Institute for Amazonian Research in Brazil, in an email.

Once the Polysphincta find a suitable host, a mother wasp will temporarily paralyze a spider and glue an egg to its body. After about two weeks, the larva hatches, punctures the host to start snacking, and likely injects the spider with a behavior-altering substance.

The spider's final act is to weave one last web; though It’s not designed to catch prey, but to coddle the wasp as it pupates. Once the web is complete, the larva finishes devouring the spider carcass. Only then does it wrap itself in its custom-made cocoon for a few days until it's ready to emerge as an adult.

Compared with other Polysphincta wasps, like members of the genus also named Polysphincta, Acrotaphus stand out. These insects are larger — about 1.5 centimeters long — and much of their skinny bodies are orange, save their black heads, antennae and stripes on their wings.

The vicious lifecycle and vivid coloring of Acrotaphus have made the wasps staple members of insect collections around the world, despite there not being much known about how many species exist or how, exactly, they function, Pádua says.

So far, researchers have only identified five of their spider host species, and only two of those interactions have been studied in detail, says Pádua. He hopes that by identifying these new Acrotaphus species, he will in turn be able to learn more about which spiders they attack — and how the spider take-over is executed by the wasp.

"The great mystery that is yet to come is to find out more about ... what kind of strategy is behind these manipulations within this group," says Pádua.

Editor's Note: We've added a note to clarify that Polysphincta is both a group of wasps comprising multiple genera, as well as a genus itself. We apologize for any confusion.