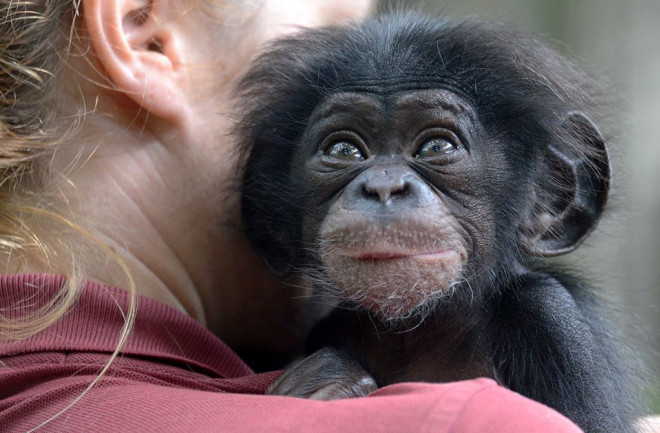 Baby Keeva peeks over the shoulder of her caretaker. (Credit: The Maryland Zoo/Facebook) A baby chimp that was rejected by her mother at birth has been matched with a surrogate mom. Keeva was born March 12 at The Maryland Zoo in Baltimore, but she recently made the journey down to Tampa Bay’s Lowry Park Zoo to get acquainted with her new troop and mother — a 32-year-old chimp named Abby that knows a thing or two about raising orphans. It’s a fairy-tale ending to a long journey.

Keeva was born without complication and in good health, but her mother Carole didn’t adapt to her new role as nurturer, which forced zoo staff to remove Keeva and hand-rear the newborn. Staffers donned chimp-like clothing and provided 24/7 care in a behind-the-scenes area of the zoo’s chimp enclosure. They familiarized her with the sights, sounds and scent of the larger troop.

A staff member at The Maryland Zoo in Baltimore dresses like a chimp while caring for baby Keeva. (The Maryland Zoo/Facebook) But human rearing was only a stopgap solution while the staff searched for a chimp family for Keeva. “Research has demonstrated the critical importance for young chimpanzees to be raised by members of their own species,” says Stephen Ross, chair of the Chimpanzee Species Survival Plan committee of the Association of Zoos and Aquariums, which assisted in the search.

Their search led them to Abby, a chimp that has motherly instincts and boasts a great track record of raising orphans. Abby raised a pair of orphan chimps from infants to adolescents while living at the Oklahoma City Zoo. She also contributed to the upbringing of an orphan named Ruben whose mother died after giving birth. Keeva arrived in Tampa Bay via airlift and was introduced to a new team of specialists who are currently providing round-the-clock care and slowly introducing her to the new troop. At two months old, Keeva weighs about 5 pounds, but she’ll need a few more months, and a few more pounds, before she’s ready to join her new mother and troop. Ultimately, her behavior and strength will dictate when she’s ready to be with Abby. For now, Keeva is observing her family in a secure enclosure, but the troop can hear, see and smell her.

Keeva is getting stronger every day. In a few months, she'll be ready to join her new family. (The Maryland Zoo). When Keeva becomes a full-fledged member of the troop, she’ll have a host of aunts, uncles and other playmates to teach her how to be a chimp. She’ll fully depend on Abby’s care for at least five years. As Mother's Day approaches, Keeva's story is a vivid reminder that moms — regardless of species — play an incredibly important role in our lives.