Red, White and Blue Crabs: These Tree-Climbing, Bird-Killing Crabs Come in Multiple Colors and No One Knows Why 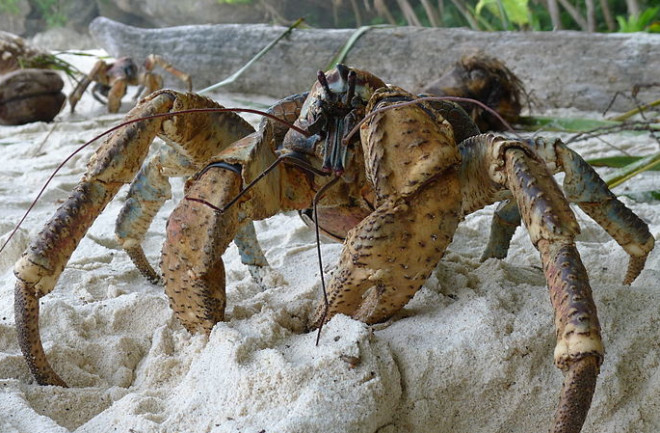 Scientists are trying to solve the mystery of these big crabs' colorful differences. Photo Credit: John Tann Coconut crabs (Birgus latro) are gigantic land-dwelling crabs found on islands throughout the Indo-Pacific. They can live for decades, and can grow to be more than 3 feet wide (legs outstretched) and weigh in at more than 6 pounds. So that name isn't because they're the size of a coconut—it's because they can actually tear open coconuts to eat their tender meat. "If a coconut falls out of a tree, they'll clamp onto it on the top and then drag it back to their husking ground," explained Victoria Morgan, a PhD Candidate in the Department of Evolution and Ecology at University of California, Davis. You can always tell where a crab hides out by the piles of coconut husks lying around. And it just so happens that out these massive, tree-climbing crabs come in multiple colors. They start out white as juveniles, when they act like other hermit crabs and don a protective shell. Then, as they mature and grow, they turn either red or blue. Really, really red, and really, really blue. "It's weird that the colors are so distinctive," Morgan explained. Stark color differences within a species, or color polymorphisms as scientists call them, are found in other crab species, but they're generally in young animals.

Coconut crabs come in strikingly different colors, but scientists can't seem to figure out why. Photo by Brocken Inaglory You'd think that kind of striking color difference arose for some evolutionary reason. Luckily, that's just the sort of colorful mystery that fascinates Tim Caro, evolutionary ecologist at UC Davis. So he asked Morgan — who was studying other land crabs at the time — to help him uncover what's going on. "We wanted to test some of the more traditional explanations for different colors in nature," said Morgan. Lots of species have different colors due to sexual selection, for example, as different male and female colors can happen if females are choosy about their mate's looks or if males compete. Or it could be a simple size thing, like if shell thickness leads to one color (which is essentially what happens in the shore crab Carcinus maenas). Or the colors could provide unique advantages in different environments, like is the case with pepper moths. So to tease apart the different possible explanations, the duo went to three different locations—the Pemba Island archipelago and Chumbe Island off Tanzania, and Christmas Island, an Australian territory south of Indonesia—and collected 325 crabs. For each, they recorded sex and took all sorts of physical measurements of the animals, including how strong they could pinch. They also when and where each was found. And they even did a quick crab personality test by noting their "disposition to being handled on a 5-point subjective docility scale"—which, for the record, goes from being shy and still to "aggressive (repeatedly grasps the holding bucket and rapidly extends abdomen)".

The dynamic duo in the field. Top L: a red coconut crab. Top R: Tim Caro testing a crab's pinch. Bottom L: Victoria Morgan weighing a crab. Bottom R: a blue coconut crab. All photos credited to Tim Caro except the bottom left, which is courtesy of Victoria Morgan. On each of the islands, between two thirds and three quarters of the crabs were red. Most of the crabs were males in general, but there was no correlation between color and sex. There were also no correlations to weight or other measurements of size. And there was no correlation between pinching ability and color, either. They did find that bigger crabs were more docile (which, when you're talking about a >6 lb crab, is probably a good thing)—but color didn't matter at all. The only slight hint they found was that the blue crabs seemed to be more common near the ocean while the red ones more common inland, but the association wasn't significant. "What we found to be most surprising was that none of the traditional hypotheses explain this system," Morgan said, laughing. In a couple weeks, though, Morgan and Caro are headed back to Tanzania. They hope to up the sample number to see if the habitat difference becomes significant, and to try some new ideas. They want to observe them mating, for example, to determine if the different colors seem to prefer mating with one of their own. And they really want to look at the crabs' DNA. "The first step is to figure out what gene is responsible for the coloring in these crabs," she explained. The team has a hunch that it might have something to do with the expression of a protein called crustacyanin (which is how blue lobsters get their smurfy hue). In addition, they want to look at the expression of genes in the crabs' eyes to determine whether they can even see the two colors. Some crustaceans have excellent color vision (like mantis shrimps), but that may not be the case with the coconut crab. They'll also look at the crabs' genomes to get a better idea of how often the two color morphs are interbreeding (especially if they don't find too many mating pairs).

Oh big crab, why are you so blue? Photo Credit: David Stanley There has to be something keeping both colors around, Morgan said — otherwise, over time, one would just disappear. "You'd expect that it'd swing one way or the other, so that you'd end up with all red crabs or all blue crabs," she said. "The fact that we see both morphs across the different parts of their range indicates there's something that's driving them to keep the polymorphisms present in their population —we just haven't figured it out yet." In the meantime, these weird, colorful crabs will continue to eek out their existence on the islands in the Indo-Pacific, chowing on their coconuts and... well, actually, about that. They're not just coconut-eaters. "They tend to eat everything," Morgan explained. She's even seen them digging through trash bins. "And their sense of smell is amazing. Whenever I was cooking on the island, they'd come from all over the island to try to eat what I was eating," she said. They'd even try to scale the gate of her kitchen area to get a taste, which she admitted was "a little creepy." And they often eat at night, so, they're basically the crustacean version of a raccoon. In fact, just last year, biologists confirmed that they not only will eat pretty much whatever, including carrion if they find it, they can climb trees and kill full-grown birds — snapping a brittle booby bone is apparently easy for those powerful claws. https://www.youtube.com/watch?v=G8gJ4RTBxcg But despite their infamous taste for flesh,"they usually keep to themselves," Morgan explained. It's not like they're chasing after you — they usually just kind of meander around slowly, "and they typically try to escape when approached by humans," she noted. "I don't want people to think that they're a real threat to human safety." In fact, it's the crabs' safety that's threatened if anything. "It's very likely that they're actually an endangered species due to population pressures from human consumption," said Morgan (they're "data-deficient" according to the latest IUCN update, but their populations are likely declining). These slow-growing crabs take at least 5 years to reach maturity, several decades to become fully grown, and can live almost as long as we do. And that means they're just not great at rebounding if their numbers crash. So if we keep messing with these amazing animals the way we are now by eating them and destroying their island homes, we may never understand their colorful lives.

I'm throwing this young coconut crab (Birgus latro) and his fancy plastic hat into the ring for the #CuteOffpic.twitter.com/abYQ1fuAER