In late 2007, seabirds off the coast of California began to die in record numbers. The waterproof nature of their feathers and been wrecked, and they were soaked to the skin. Without an insulating layer of air trapped within their plumage, the damp birds were suffering from extreme cold. These are exactly the type of problems that seabirds face when they blunder into oil spills, but in this case, not a drop of petroleum had entered the water. The problem was a biological one.

At the same time, Monterey Bay in California was plagued by a massive "red tide" - a bloom of microscopic algae called dinoflagellates. These blooms can include millions of cells in just a millilitre of water and some species churn out toxins that kill local wildlife. Sea lions, dolphins, sea otters, manatees, whales and even humans have all succumbed to these poisons, either directly or by eating contaminated food.

David Jessup from the Marine Wildlife Veterinary Care and Research Center found that these algae were the source of the birds' misfortune, but not because they were secreting toxins. Instead, they produced a foam that was loaded with surfactants - wetting agents. These are the chemicals used in detergents; they lower the surface tension of a liquid and allow it to spread more easily over a surface. This foam was the agent behind the seabirds' water-logged feathers. 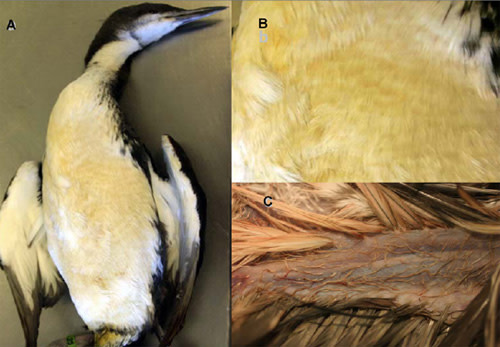 The dead species included fulmars, loons and grebes. The latter two groups are particularly vulnerable to oil spills too, for they are totally aquatic and never come into land, even during winter. That makes their waterproofing especially important. Without it, even healthy individuals would freeze, especially during winter when they've just finished a long migration and are in poor condition.

In 2007, Jessup collected the bodies of 207 dead birds from 14 different species, as well as 550 stranded and seriously ill individuals. They were soaked through, starving, and suffering from severe hypothermia. Their feathers, particularly on their undersides were coated in a yellow-green slime that smelled vaguely of linseed oil. The birds weren't suffering from any obvious infections, they showed no signs of poisoning, and when the survivors were cleaned and fed, many made a full recovery . Clearly, the slime wasn't that toxic, if at all.

The birds died in three pulses that matched the timing and distribution of three red tides, caused by a dinoflagellate called Akashiwo sanguine. This species produces a thick foam and when Jessup analysed its molecular contents, he found no traces of any petroleum compounds, commercial surfactants or pesticides. Instead, he detected large amounts of specific amino acids that are often associated with red tides and are known to be powerful surfactants. He found the same amino acids in the slime that coated the sea birds.

These were the source of the problem. Normally, water slides off a seabird's feathers like... well, like water off a duck's back. Even if feathers are dipped in water, they maintain their shape. But when Jessup dunked feathers into the algal foam, they lost their repellent ability and became water-logged. 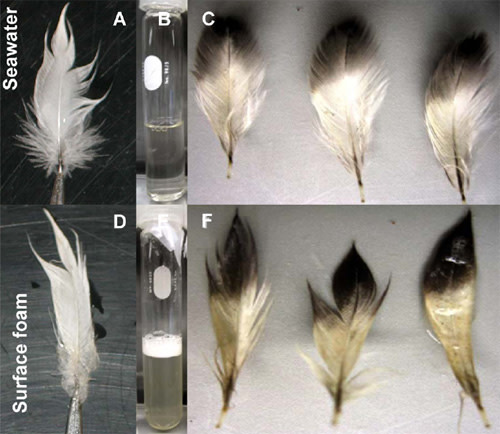 It's possible that some components of the slime were inhaled too. Some of the birds had haemorrhaged into their lungs and the linings of their airways had been mildly damaged. Jessup couldn't work out the cause of these injuries, but he suspects that some compounds of the slime may have been released into the air as aerosols. Certainly, some of the toxins released by red tide species can do this.

This is the first report of red tides killing seabirds in this way, but other instances at smaller scales may just have gone unnoticed. After all, the symptoms shown by the dying birds were fairly non-descript and could easily have been overlooked as signs of a tiring migration or a recent molt.

It seems, however, that the timing of the blooms is important. In 2004 and 2006, red tides also washed over Monterey Bay but in the earlier months of August and September. Neither event killed large numbers of seabirds. The 2007 massacre was a combination of the red tide foam, the influx of large numbers of hungry migrants and the cold winter temperatures

Nonetheless, such events may become more frequent in the future. It's unclear what effect climate change will have on the frequency of red tides, but it's clear that these harmful algal blooms have become more and more common, both globally and in Monterey Bay in particular. The area has even been described as a "red tide incubator" - bad news, since it's also an important site for several species of migrating birds. 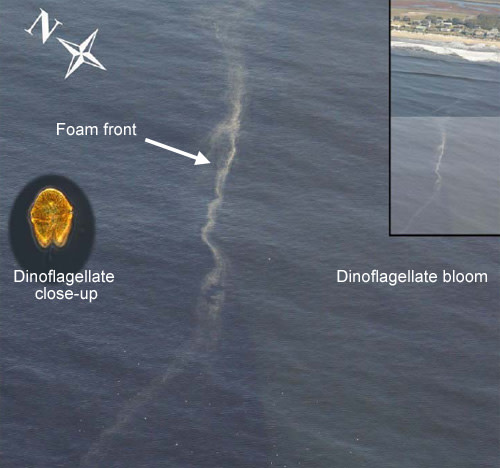