Reading a Cuttlefish's Mind — On Its Skin 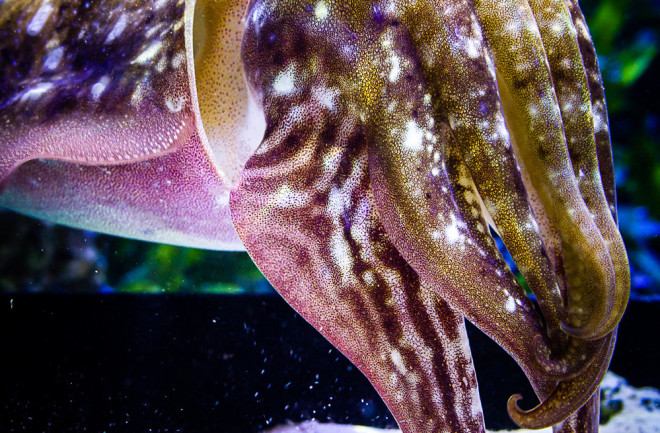 (Credit: Stephan Junek) Pity the cuttlefish that tries to play poker. Where humans might blush when embarrassed or go white when frightened, cuttlefish wear their thoughts on their skins much more literally. Our own color transformations are caused by nothing more than changes in the blood flowing right under our skin, and it's a poor marker of what our actual thoughts are. Cuttlefish, by contrast, are covered in up to millions of tiny pigment-filled cells called chromatophores. Muscles in the cells stretch to reveal the colors, and it's a part of why a cuttlefish, closely related to octopuses and squid, can go from a drab brown to a perfect mimic of a coral reef in seconds.

You can think of chromatophores as pixels, like on a TV or computer screen, and they telegraph a cuttlefish's thoughts at any given moment — whether it's frightened or relaxed, hunting or looking for a mate. The pigment cells are directly innervated by muscle neurons linked to the cuttlefish's brain, so to look at its skin is to come close to reading a cuttlefish's mind. https://www.youtube.com/watch?v=pgDE2DOICuc Seeing a chromatophore change color, then, might be a good proxy for seeing neurons themselves fire, something that's normally only possible with complex equipment. Watching neural processes take place in real time right in front of them would be a huge boon to researchers studying how cognition happens in animal brains. The only problem is that watching individual pixels change on the skin of a moving, soft-bodied creature is really hard. Tracking any one chromatophore over time had proven nearly impossible.

That's why researchers from the Max Plank Institute for Brain Research and Goethe University in Germany found a better way to do it. Their breakthrough came after realizing that the pattern of chromatophore placement functioned something like a fingerprint — that is, it was unique. This allowed them to train a computer to recognize small patches of skin and keep track of them from frame to frame in a video, letting the researchers see how the chromatophores behaved over time, at a rate of 60 frames per second.

A detail from the paper showing cuttlefish chromatophores. (Credit: Reiter et al.) The end result gives researchers insight into how the neural processes governing skin pattern changes works. They found that the cells stretch and relax in a similar pattern every time, no matter what the stimulus is. Because chromatophore changes are likely a good stand-in for neuron activity, the researchers were actually watching the patterns of neurons firing in the cuttlefish brain, and it stands to reveal new things about how groups of neurons in the brain work together to complete complex tasks. Their method also revealed something interesting about the chromatophores themselves. The cells come in variations of five colors: Yellow, orange, red, brown and black. But they don't stay one color forever, the researchers found. Instead, they all start out as yellow, before darkening to orange, then red and eventually black. Cuttlefish are constantly growing new chromatophores, and they balance the rate at which the cells change color with the growth of new cells to make sure they always have a roughly equal number of colors. Next up for the researchers is to take a deeper look at how cuttlefish change the texture of their skin. In addition to swapping out color patterns, cuttlefish enhance their mimicry by changing their skin in 3D, going from smooth to bumpy, for example. The process is likely controlled in much the same way as the chromatophores are, and it offers another chance to watch the cuttlefish brain at work — just by looking. The team published their work Wednesday in Nature.