Razor clam creates quicksand to bury itself. So does RoboClam 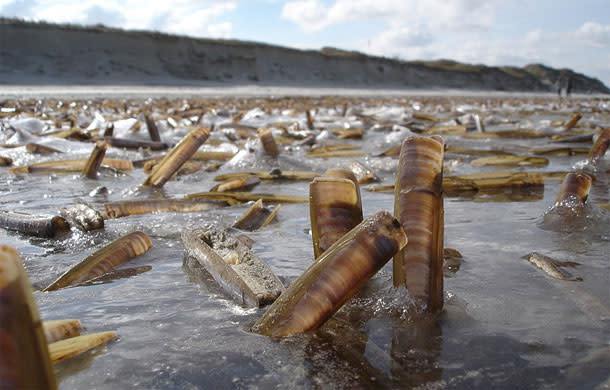 Anyone who has tried to pull a razor clam from a sandy beach knows that they can dig fast. These edible animals can bury themselves at around one centimetre per second, and they go deep. A clam the length of a hand can create a burrow up to 70 centimetres down. Like all molluscs, the clam has a muscular foot, but it’s not that muscular. Based on measurements of the foot’s strength, Amos Winter from Massachussetts Institute of Technology calculated that it should only be able to dig a couple of centimetres into the mud. It shouldn’t be able to submerge its body, much less create a burrow five times longer. But Winter knows the razor clam’s secret: it doesn’t just rely on raw power. The clam adds water to the soil just below it, making it softer and easier to penetrate. It digs by turning part of a beach into quicksand. [embed width="610"]http://www.youtube.com/watch?v=wZ5wU2MvAaI[/embed] The clam’s digging equipment couldn’t be simpler: a pair of long valves that run the length of its body and open or close its shell; and a foot that sits beneath the them. It extends the foot downwards and pushes against it to lift the shell up slightly. Then, it contracts the valves, sending blood into the foot and inflating it. This foot becomes an anchor. By pulling against it, the clam can drag its shell downwards. To understand how these motions create a burrow despite the foot’s weedy nature, Winter had to capture several clams. And to do that, he had to become a licensed clam digger. Back in the lab, studying the clams wasn’t easy. As Winter writes in a wonderfully deadpan academic way: “The adage ‘clear as mud’ is used to describe the difficulty of visually investigating burrowing animals.” He finally saw what the clams were doing when he created a homemade “visualiser”— a repurposed ant farm. The animal was trapped between two transparent plates, filmed with high-speed cameras, and surrounded by a ‘beach’ of glass beads. 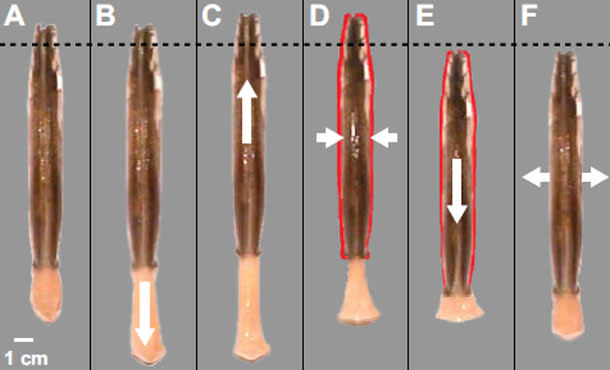 Winter’s videos revealed that when the clam contracts its valves, it does more than just pump the foot with blood. The contraction closes its shell, which relieves the pressure on the surrounding soil. The soil starts to crumble, and mixes with water pulled into the gap from above. The water “fluidises” the soil, making it soft and loose like quicksand. It offers far less resistance, and the clam can move through it with around ten times less energy. It does so quickly, before the soil has a chance to solidify again. Winter isn’t just studying clams for the sake of it. The list of sponsors for his study is telling: Battelle Memorial Institute, a science and technology development company; Bluefin Robotics; and the Chevron Corporation, an energy company that explores for oil and gas. Winter used his newfound knowledge to create RoboClam: a robot that duplicates the clam’s burrowing technique. It’s about the size of a lighter, but it comes with a much larger supportive frame of pistons and regulating elements. After further development, RoboClam could act as a lightweight anchor that could be easily set and unset. It could tether small robotic submarines for studying the ocean floor; help to install undersea cables or deep-water oil rigs; or even detonate buried underwater mines. Reference: Winter, Deits & Hosoi. 2012. Localized fluidization burrowing mechanics of Ensis directus.Journal of Experimental Biology http://dx.doi.org/10.1242/jeb.058172Photo by Arne Huckelheim