Rats Dream About the Places They Want to Explore 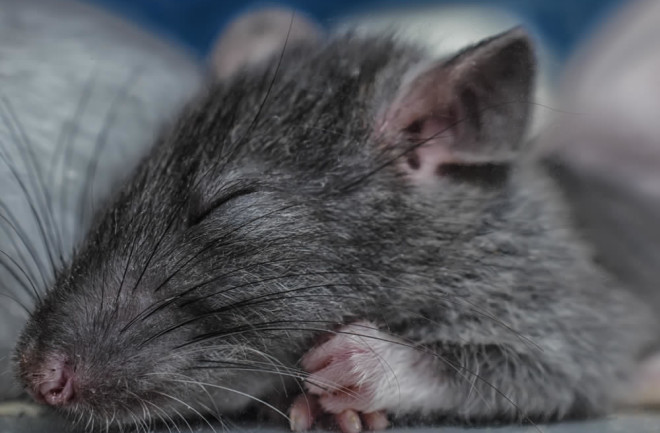 Rats Dream About the Places They Want to Explore

When they see a treat they can’t reach, rats’ later dreams depict them walking toward it, researchers have found. The discovery may one day provide some insight into what happens in the human mind during sleep.

Maps in the Brain

Scientists already knew that after a rat has explored an area, certain neurons in the hippocampus called “place cells” replay those patterns while the rat sleeps.

“Place cells” in both rats and humans help us store memories about location and form mental maps. When you’re in one spot, a set of place cells fires; when you move to another spot, a different set of place cells fire to mark the new location. If scientists can record the activity of specific brain cells, then, they can spy on how the mind maps new places. So far, that kind of recording requires implanting tiny electrodes on very thin wires into the brain, which can’t be done with human subjects for ethical reasons, but it’s possible with rats.

But can rats mentally map a new place before they’ve explored it? Can they, in some sense, “imagine”? That was what researchers set out to study.

Dreaming of the Future

First, researchers let rats explore a T-shaped track. The rats could run along the center of the T, but the arms were blocked by clear barriers. While the rats watched, researchers put food at the end of one arm. The rats could see the food and the route to it, but they couldn’t get there.

Then, when the rats were curled up in their cages afterwards, scientists measured their neuron firing. Their brain activity seemed to show them imagining a route through a place they hadn’t explored before. To confirm this, researchers then put the rats back into the maze, but this time without the barriers. As they explored the arm where they had previously seen the food, the rats’ place cells fired in the same pattern as they had during sleep.

This mental mapping process made up about 8 percent of the rats’ brain activity during sleep. That may not sound like much, but neuroscientist Hugo Spiers, a co-author on the study published in eLife, says it’s a significant amount of activity for the brain to devote to a single task during rest.

The rats’ activity may shed some light on what goes on in the human mind during sleep. Sleeping does seem to improve human performance on memory tasks – a finding which has been used to argue against all-night study sessions. And desire is also a crucial part of that process for people. “People are much better at doing the stuff that they’ll make more money on after they’ve slept,” said Spiers. “Something about sleep is using that desire information: that you do want to do better.”

The rat experiment makes it easy to see the possible evolutionary benefits of dreaming, or something like it, although it’s not clear yet whether mapping future routes to food during sleep actually helps the rats navigate later. That, says Spiers, is material for a future experiment.

The Stuff of Dreams

Researchers aren’t sure yet whether this mental mapping is related to dreams or a different mental process. “People have talked in the past about these kind of replay and pre-play events as possibly being the substrates of dreams, but you can’t ask rats what they’re thinking or dreaming,” said Spiers.

But he added, “There is that really interesting sense that we’re getting at the stuff of dreams, the stuff that goes on when you’re sleeping.”