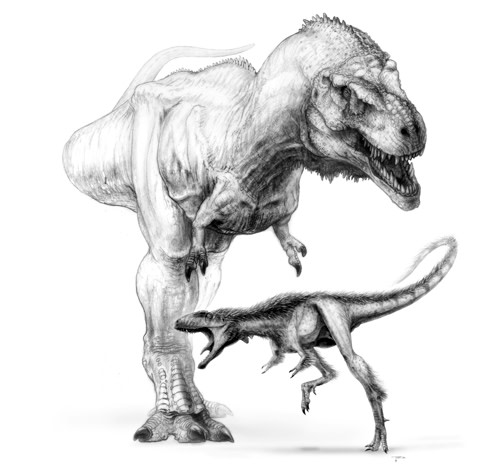 Meet Raptorex, the "king of thieves". It's a new species of dinosaur that looks, for all intents and purposes¸ like the mighty Tyrannosaurus rex, complete with large, powerful skull and tiny, comical forearms. But there's one very important difference - it's 100 times smaller. Unlike the ever-shrinking world of music players and phones, it seems that evolution crafted tyrannosaur technology with much smaller specifications before enlarging the design into the giant predators of the late Cretaceous.

Raptorex is a new species of meat-eating dinosaur, discovered in northwest China by Paul Sereno from the University of Chicago. The specimen is a young adult, but it wouldn't have grown to more than 3 metres in length. It stood about as tall as a human, and wouldn't have weighed much more. And yet Raptorex looked very much like a scaled-down version of its giant future relatives. All the features that made tyrannosaurs so recognisable and such efficient killers (except their enormous size) were present in this animal.

It really is a beautiful transitional fossil. As Sereno says, "Raptorex really is a pivotal moment in the history of the group where most of the biologically meaningful features of tyrannosaurs came into being, and the surprising thing is that they came into being in such a small animal." Raptorex clearly shows that natural selection initially honed the distinct body shape of these giant predators at a 1/100^th scale. This design was then scaled up with remarkably few modifications.

It had a skull that had clearly been developed into the animal's primary weapon. It was unusually big for its body size (40% of its torso length), it was structurally reinforced against the stresses of heavy bites, it had large places where powerful jaw-closing muscles attached and it was armed with sharp teeth.

Its limbs also had classic T.rex proportions - strong hind legs that that were fit for running, but miniscule forearms. In contrast, other early tyrannosaurids, such as Guanlong, Dilong, Eotyrannus and Stokesosaurus, looked very different with arms that were long and useful, and proportionally smaller heads (just 30% of its torso length). Only a few distinctive parts of their skeleton mark them out as early tyrannosaurids.

Raptorex brain was also large for its size. For comparison, the Jurassic predator Allosaurus had a brain that was just 60% bigger, despite having a body that was 10 times heavier! Raptorex's sense of smell was particularly well-developed, just as Tyrannosaurus's was. A scan of its skull showed a large area for its olfactory bulbs - the parts of its brain devoted to smell. These bulbs take up a full 20% of the brain's total volume, a proportion that exceeds that of all meat-eating dinosaurs except the giant tyrannosaurs.

Despite what many newspapers will assuredly tell you, Raptorex isn't the ancestor of Tyrannosaurus although it probably looked very much like what this hypothetical animal would have done. It's more like an early cousin, but one that's clearly more closely related to T.rex and its giant kin than any of the other smaller species so far discovered.

Based on his new fossil, Sereno tells a three-act story of tyrannosaur evolution. Act One was set in the Jurassic and early Cretaceous periods, with a cast that included Eotyrannus and Dilong. Their snouts had become stronger and their jaws more powerful, but they were typical of other predators of the time. It was only during Act Two, around 125 million years ago, that this dynasty of predators started to become truly specialised, enhancing the skull, lengthening the legs, and shrinking the forearms.

All of these features were present in Raptorex, setting the stage of the final act in tyrannosaur evolution - getting really big. The lineage grew in bulk by around 100 times. By the end of the Cretaceous, the meat-eating scene in the northern continents was dominated by tyrannosaurids - predators such as Albertasaurus, Gorgosaurus, Daspletosaurus and Tarvosaurus, each weighing in at 2.5 tons or more.

It would be fascinating to see if the same story could be told for other lineages of predators, if the abelisaurids, carcharodontosaurids and spinosaurids all had their own mini-prototypes. 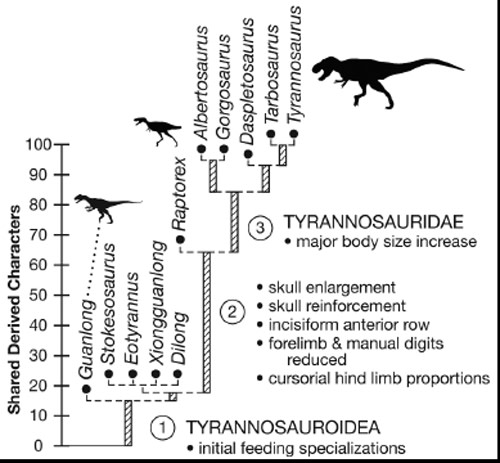 Images: Reconstruction by Todd Marshall; other images from Science/AAAS