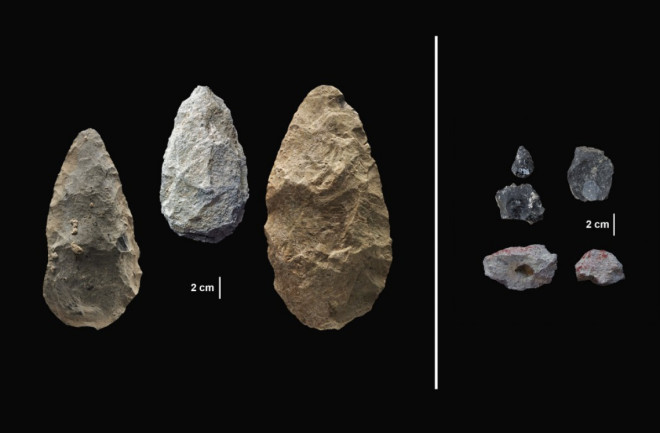 Artifacts from Olorgesailie, Kenya, record the evolution of human behavior. On the left, Acheulean handaxes represent an earlier, less advanced tool technology. On the right, hand-worked pieces of ochre and smaller, more precise tools point to innovation and the development of more sophisticated cognition much earlier than once believed. (Credit Human Origins Program, Smithsonian Institution)

Three papers, published together in Science today, add up to a paradigm-shoving conclusion: Key aspects of what we think of as modern human behavior evolved more than 300,000 years ago, a radical revision to the evolutionary timeline.

To understand the significance of the trio of studies, let’s take a brisk walk through recent changes in our understanding of human evolution. For decades, the consensus was that Homo sapiens evolved around 200,000 years ago in Africa, with anatomically modern humans emerging 100,000 years ago and leaving their ancestral continent around 50,000 years ago.

In the past few years, however, a series of surprising fossil finds, as well as advanced genetic analysis, have smashed that old paradigm like an angry Hulk.

The new picture of human evolution just emerging is that our species is more than 300,000 years old and left Africa much earlier than we thought, beginning at least 120,000 years ago and possibly as early as 200,000 years ago. Genetic analysis suggests our species may be even older, and was already interbreeding with Neanderthals, up to 470,000 years ago.

A Different Kind of Clue

Fossilized bones, and the ancient DNA researchers are sometimes able to extract from them, can only tell us so much, however. Often missing from the picture is how the individuals lived. While the timeline for the physical evolution of our species gets pushed further and further back, Homo sapiens are defined as much by their modern human behavior as the shape of their skull. Any early Homo sapiens running around might have looked at lot like us, the thinking went, but they didn’t act like us and weren’t capable of the same cognitive feats, such as symbolic thinking.

Enter today’s studies, which take a multifaceted look at the Kenyan site of Olorgesailie. Taken in sum, the papers present evidence that gradual climate change drove humans to adapt to a new environment and altered food supply; the adaptations appear to include far-flung social and trade networks, advanced tool technology and manipulation of ochre, a variety of high-iron rock used throughout the human story as pigment.

(Shameless but relevant plug: check out my feature on ochre and human evolution in the April issue.)

So what, you might be thinking…what’s the big deal? The big deal is that this kind of innovation and adaptation requires some pretty complex cognitive abilities, particularly social networking, which by definition involves interaction between two or more sets of individuals.

George Washington University paleoanthropologist Alison Brooks, a senior member of the Olorgasailie team and lead author of one of today’s papers, explained it to me with a comparison to our closest living relatives: “If you think of us starting out like chimpanzees, if you’re a chimp and you go into someone else’s territory, you’re dead.”

The three papers make a strong case for the very big deal that complex cognitive abilities appear to have been present in humans more than 300,000 years ago.

Necessity Is The Mother of Innovation

One of the new studies sets the scene for this watershed moment in human behavior by recreating, through soil samples, faunal remains and other evidence, the environment of the Ologesailie Basin over roughly half a million years. About 800,000 years ago, the area was basically a floodplain. Over millennia, however, the climate started to swing between wet and dry, and eventually the area became largely arid grassland.

The Olorgesailie Basin in Kenya has been the focus of paleoanthropological research for several years. (Credit Brooks et al 2018)

As you might imagine, such a significant change in environment resulted in a dramatic change in the animals who lived there, particularly the larger mammals, many of which disappeared from the local fossil record. In their place, smaller animals appeared, such as the springbok, likely because they were better-suited to the new ecological reality.

(Sidenote: I know some readers are a bit obsessed with episodes of climate change in the distant past, not from a hungry-for-knowledge perspective but from a weird current climate change-denier viewpoint. So to those readers, please note that yes, climate change occurred at Olorgesailie, but it was over hundreds of thousands of years, not decades, so your attempted analog is invalid. Thanks.)

This gradual but significant change in environment unfolded at Olorgesailie just about the time that Homo sapiens was emerging as its own branch of the hominin family tree (more on that in a moment). And, in the artifacts present from much of this half-million years, we see a transition in the kinds of tools made and used. The authors suggest that the change in food supply and environment forced the hominins present to innovate and make different kinds of implements.

Tools of the Trade

Which brings us to the second paper, in which Brooks and her team focus on those tools, as well as other artifacts. At the oldest Olorgesailie sites, the hominins present were making large handaxes in the Acheulean style (easily recognized by its teardrop shape). Of note: The tools were made from locally available rock.

The more recent artifacts, however, are smaller, more complex and — this is the key point — almost half of them are made from obsidian. Spoiler alert: there is no obsidian at Olorgesailie. Using a relatively recent method of geochemically fingerprinting material, the team determined that the obsidian came from sites significantly farther away, including over rough terrain.

(Another shameless plug: I get into geochemically fingerprinting research, which is fascinating, in greater detail in the April issue’s ochre feature.)

Also found were thousands of obsidian flakes, which tell researchers that the material was brought from its origin and fashioned into tools at Olorgesailie. That’s where the notion of trade and social networking comes in. Hunter-gatherer societies that persist today tend to have territories of no more than 25 miles in diameter, even less over rough terrain. Because the obsidian came from well outside that range, it implies that the people who got the raw material and worked it into tools either ventured into another group’s territory to get it or met up with the other group and acquired the obsidian from them in a trade arrangement.

Either way, it suggests the hominins were capable of complex modern human behavior more than 100,000 years before the timeframe suggested by previous research.

Also found with the obsidian artifacts: manganese, sometimes used as a black pigment, and two pieces of ochre which show wear indicative of human manipulation. One piece appears to have been chipped and the other ground, perhaps to make a powder. Analysis suggests that a hominin took a chisel or similar tool to the second piece and attempted to perforate it.

While researchers have turned up pieces of ochre in South Africa that appear to have been used by hominins and may be 500,000 years old, there is some dispute over the dates. The ochre at Olorgesailie is certainly the oldest manipulated ochre material in East Africa and, perhaps, the oldest confidently dated example in the world.

Pieces of ochre and manganese found at Olorgesailie point to humans using the rocks as pigment to color other materials, a type of symbolism that is considered a hallmark of modern human behavior. (Credit Human Origins Program, Smithsonian Institution)

And that brings us to the third paper in today’s Science hat trick, which focuses on dating. Context is everything in paleoanthropology and archaeology, particularly being able to date artifacts and fossils in a confident way. Well aware that the kind of evidence uncovered at Olorgesailie requires robust dating to back up the claims of modern human behavior going back 300,000-plus years, project members employed multiple dating techniques to all of the sites studied. The dating squad confirmed that the older, locally-sourced Acheulean handaxes were out of the picture by about 320,000 years, replaced by the more complex, imported obsidian variety. The study also establishes the artifacts described as the oldest Middle Stone Age examples identified — so far — in East Africa.

Personally, I’m thrilled about the Olorgesailie finds, and think that the conclusions, while a shock to the conventional timeline, are also highly credible. But I’m also greedy for more. In particular, with all the tools and stone flakes and animal remains and soil samples collected, I really wanted some hominin fossils found. Although hominin bones have been found in the general region, none were associated with any of the finds described today.

That leads, in my mind, to an even bigger question: Olorgesailie offers us evidence of modern human behavior, but who was doing all that behaving?

Yes, both the Acheulean handaxes from the older sites and the obsidian tools from the younger sites are all associated with Homo sapiens elsewhere in the archaeological record. But, bit by bit, traits once thought to be exclusive to our species have been shown to exist more broadly in the genus Homo, whether we’re talking about research suggesting Homo naledi intentionally placed its dead or, just a couple weeks ago, another study in Science and one in Science Advances providing yet more evidence that Neanderthals were creating symbolic art just fine on their own, without any influence from us, thanks very much.

This is a wonderful time to be following paleoanthropology: Significant new evidence is coming to light at an accelerated clip, and methods to analyze it are growing ever more refined. But at the same time, as the arc of evolution becomes clearer, the story also gets more complex, and a bit murky in the details. I have no doubt that more surprises are in store.

Read more about the Science studies on environmental changes that may have spurred hominin innovations, evidence of early trade and pigment use, and the methods researchers use to date these significant new discoveries. If you want a refresher course on human evolution, or a primer that includes much of the freshest research, be sure to visit the Smithsonian Institution’s Human Origins Program site. In addition to playing a key role in the research out today, the program provides oodles of accessible information on human evolution, suitable for all ages and levels of interest.