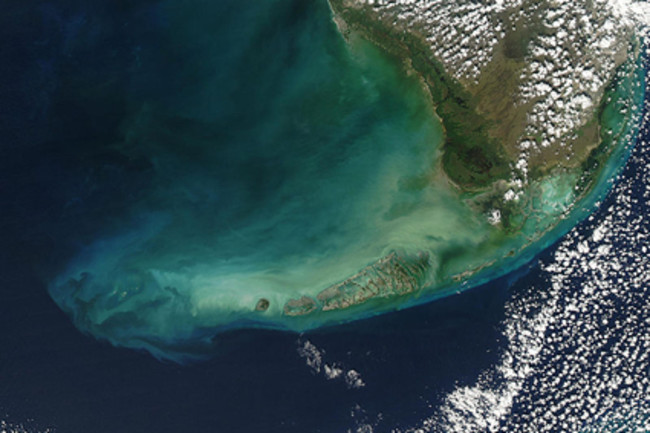 The primary reactions in photosynthesis—the first steps in plants' conversion of sunlight energy into energy stored in carbohydrates—are incredibly efficient. And in a new study in Nature, chemists reveal that they may have found part of the reason why: quantum mechanics. A couple years ago, scientists first showed in bacteria proteins that the electrons were moving according to a quantum mechanical phenomenon called coherence, rather than abiding by the classical laws of physics. But where those early experiments

had been cooled to 77 kelvins (–196 degrees Celsius)—this experiment was the first conducted at room temperature, 294 K, to replicate such effects [Scientific American]

. Thus, the new study, which was done on marine algae, suggests this phenomenon can occur in a living biological system. Quantum coherence occurs when an electron interacts with more than one molecule at a time, entering a multi-state kind of existence. Study leader Greg Scholes explains this quantum trick in a slightly simpler way:

“The analogy I like is if you have three ways of driving home through rush hour traffic. On any given day, you take only one. You don’t know if the other routes would be quicker or slower. But in quantum mechanics, you can take all three of these routes simultaneously. You don’t specify where you are until you arrive, so you always choose the quickest route” [Wired.com]

. To see if this was happening in their test algae, the scientists targeted lasers onto antenna proteins, which play the role of routing the solar energy the plant receives to places where the photosynthetic reactions are taking place. The incredibly short laser bursts sent electrons spinning that the team could track. Sure enough, the energy passed simultaneously through multiple pathways, the team says, showing coherence at work. The researchers can't yet say how widespread this trick is in the plant kingdom. But if coherence happens in many different plants, it could help to explain why photosynthesis is so efficient.

“That vibrating electron could put some feelers out and see which path to take,” Scholes says [Science News]