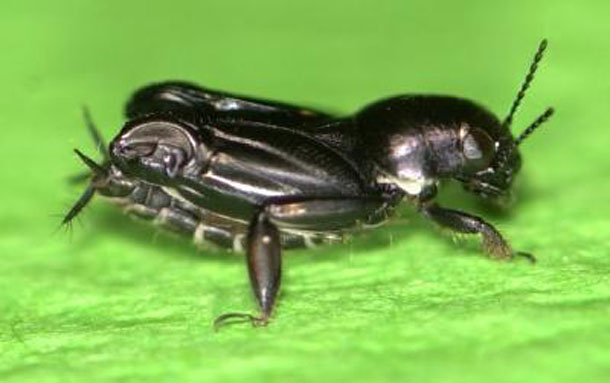 When Malcolm Burrows first heard the sound of a pygmy mole cricket leaping from water, he was enjoying a sandwich. Burrows, a zoologist from the University of Cambridge, was visiting Cape Town and had snuck out the back of the local zoology department to eat his lunch by a pond. “I heard sporadic thwacking noises coming from the water,” he says. “When I looked more closely I could see small black insects jumping repeatedly from the water and heading towards the bank.” They were pygmy mole crickets, a group of tiny insects just a few millimetres long. Despite their name, they’re more grasshoppers than crickets, and are some of the most primitive members of this group. They’re found on every continent except Antarctica. Pygmy mole crickets cannot fly, but they can certainly jump. Burrows collected some of the individuals from the pond, and took them back to the lab to film them with high-speed cameras. When they take off, they often spin head-over-tail, but what they lack in elegance they make up for in distance. They can jump over 1.4 metres, more than 280 times their own body length. Doing this on land is one thing, but as Burrows saw at the pond, these insects can also jump from water. This ability serves them well—they live in burrows near to fresh water, which frequently flood. Their leaps send them back to terra firma, saving their lives. Burrows found that these insects jump from water in a completely new way. Animals like pond-skaters and the basilisk lizard can walk on water by relying on surface tension—the tendency of the surface of water to resist an external force. But the mole cricket extends its hind legs so quickly that they break right through the surface. 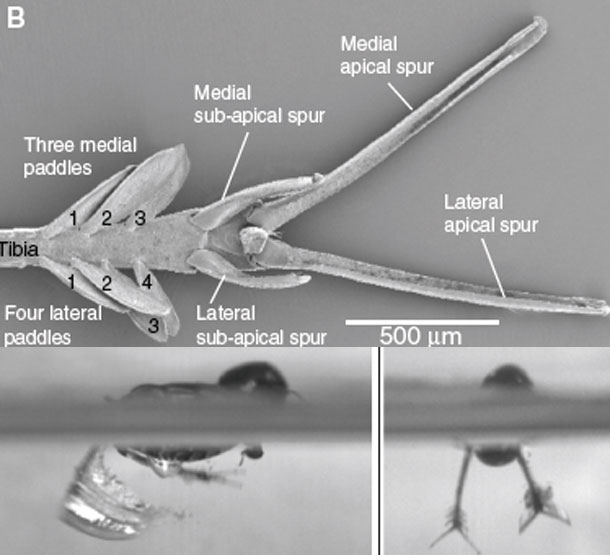 As the legs move through the water, three pairs of flat paddles and two pairs of long spurs flare out from each one. These structures have a concave shape, much like an oar. As they flare out, they increase the surface area of the mole cricket’s leg by around 2.4 times, allowing it to push down on a much larger volume of water. And once the legs are fully extended, the paddles retract to reduce the drag on the airborne insect. From water, the mole crickets can only jump for 3 centimetres or so. That’s pathetic compared to their land-based attempts, but still more than 5 times their body length, and enough to save them from drowning. When Burrows shone ultraviolet light onto the paddles, they glowed with a bright blue colour at their bases. That’s the signature of resilin, an incredibly elastic protein that powers the jumps and wingbeats of many insects. Its presence on the mole cricket suggests that the paddles and spurs are spring-loaded. “It just shows what amazing things can be found close to where we live and work,” says Burrows. “Instead of spending time exploring the more exotic parts of South Africa, I spent most of my visit there essentially looking outside my back door.” Reference: Burrows & Sutton. 2012. Pygmy mole crickets jump from water. Current Biology 22: R990 All photos and video by Malcolm Burrows