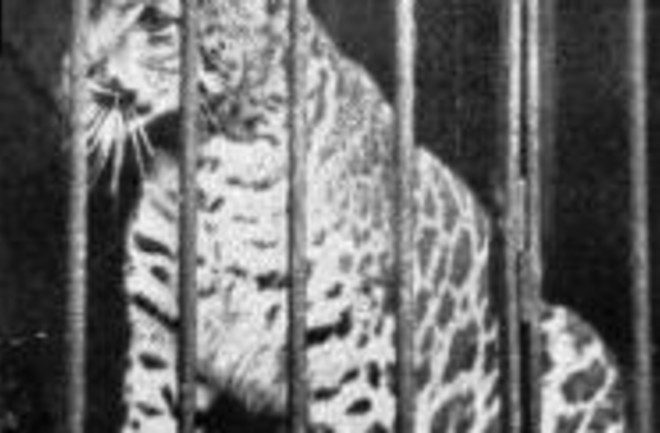 Pumapard, 1904 You are probably aware of Pantherahybrids from Napoleon Dynamite. Specifically, Ligers, the largest of all the big cats. But the hybridization of the Panthera species shouldn't be so shocking. They have diversified only within the last 2 to 4 million years. The lone New World variant (or at least surviving New World variant, recall the extinct American lion), the jaguar, arrived a few million years ago across Beringia. This is not too surprising, as many iconic "American" animals, such as the American bison, made the same journey (Camels went the other direction). But there were already "big cats" in the New World. The puma or cougar. These are notPanthera, and I only recently realized that jaguars were not closely related to this species. Rather, the puma is the ironically largest of the "small cats". Which brings me to the subject of this post, the enigmatic pumapard. This is purported hybrid between leopards and pumas. The citations from the Wikipedia entry are old, and I have a hard time confirming them (also checked via Google Books). So I'm not quite sure if this is a legitimate hybrid, or some rumor like the humanzee. Since there are museum specimens I'd be curious if someone is interested in doing a genetic test in the near future to confirm their hybrid nature.

the puma lineage diverged from the Panthera ~10 million years ago

. Though hybridization is not impossible for mammals at this distance, it makes more plausible the reports that pumapards exhibit much lower fitness as conventionally understood, being subject to dwarfism and reduced life expectancy. One genuine confirmed hybrid that might surprise many, the camel-llama cama, probably had parents whose last common ancestors diverged on the order of ~5 million BP (assuming that the ancestors of the llamas and camels were already diverging in North America before the migration of the llama lineage to South America ~3 million years ago).