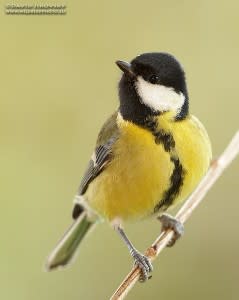 As anyone in Europe knows, pairs of great tits aren't hard to find. They're really everywhere, if you keep an eye out for them — great tits can be found from the northern coast of Africa all the way to western central Russia, and in between. Bouncing around without a care in the world, great tits are one of the most popular and well known birds in the world. Yes, I'm talking about the birds, guys. The pretty, charismatic, if not slightly murderous

birds. Great tits have become a wonderful research model for scientists, as their widespread distribution and general lack of fear of people makes them easy study subjects. There are literally thousands of published papers looking at their ecology, behavior, genetics, and evolution. But while scientists have been studying these colorful, engaging birds for about a century, there's still a lot to discover. Just last month, scientists from Palacky University in the Czech Republic learned something new, and incredible, about female tits: the prettier the mother, the healthier the offspring. Scientists have long suggested that measures of attractiveness, whether in humans or animals, are linked to evolutionary quality. Individuals vary in many ways, some of which are important for reproduction and survival. Over time, you would expect that traits which act as signals for high quality mates would be preferred, thus serving as criteria for attractiveness. Even things like our preference for symmetrical faces is likely tied to perceptions of health and vitality

. But, if looking good gets you laid, there's a lot of incentive for cheaters to try and take advantage of the system. So, the question remains: do attractive traits actually correlate to an individual's health or reproductive success? When it comes to great tits, scientists say yes. Vladimír Remeš and Beata Matysioková decided to pull a bait-and-switch on female great tits to determine if their looks really mattered when it came to the quality of their offspring. In great tits, the size of black breast stripe, yellowiness breast feathers, and immaculateness of the white cheek are what make a bird "hot", at least in the eyes of potential mates. The team quantified each of these characteristics for individual males and females, and let the birds get down to business. As soon as the babies hatched, though, the scientists swapped the broods, putting the babies from one mom into the nest of another, and vice versa. They then tested the chicks two weeks later, measuring their weight and the strength of their immune system.

Figure 1. from the paper: Design of the experiment, with offspring swapped two days after hatching

The team found that prettier moms really did have better babies. The larger the area of the birth mother's black chest patch, the bigger the babies grew in 14 days. Similarly, the more immaculate her white cheek, the stronger their immune systems responded. But the foster mother also had a role in the quality of the young - if she had a nice, white cheek patch, the babies also had a good immune system, even if they came from an ugly mom.

These data suggest that white cheeks and a black breast are acting as real signals of mate quality. Whether it's a sign of good genes or good parenting, however, could not be determined. Clearly, the mother's role in the baby's health is important even after hatching, as the pretty foster moms were also able to boost immune response. But the benefits of a beautiful birth mom were undeniable, suggesting that healthy babies are either bred or nurtured early on in life — at least when it comes to great tits. Citation: