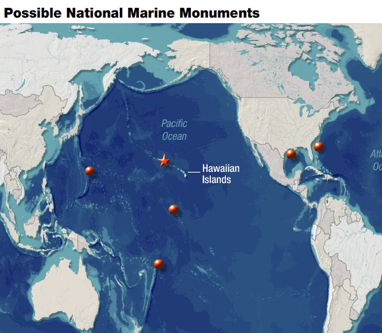 It's a rumor that has been percolating about the Hill for months... and now may be moving toward reality rapidly! Yes folks, it's time to get behind the Bush Administration on something. It seems George W. Bush has plans to leave a 'blue legacy' and to that I say, go for it Mr. President! No matter where you fall politically, we know our oceans are in serious peril due to overfishing, agricultural runoff, increased carbon sequestration, and a myriad of other threats. Fisheries are in dramatic decline, the pH of the marine environment is changing, and we've got ocean dead zones almost the size of New Jersey. So now that our Commander-in-Chief appears ready to take unprecedented strides toward protecting the marine environment, let's do all we can collectively to make sure it happens!