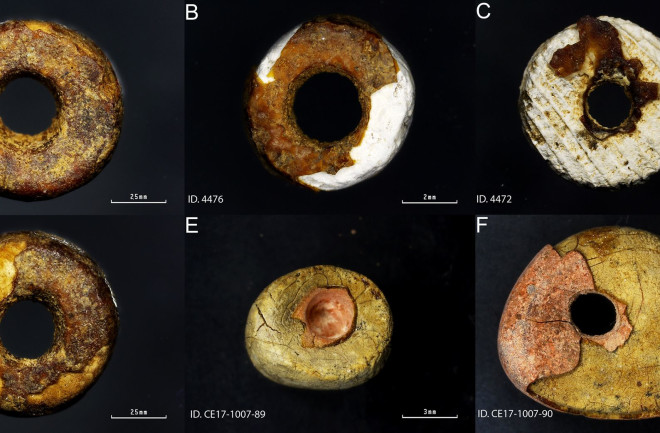 The beads examined in the study. In some cases, the layers of resins have chipped away to reveal the core beneath. (Credit: Odriozola et al., 2019) Between the third and second millennium B.C, trade networks crisscrossed the Iberian Peninsula in southwestern Europe moving amber, a rare and valuable commodity, across the continent. Now researchers say some of that amber was actually clever fakes. They suspect the counterfeit gems may have been used to swindle wealthy buyers. “This is the first time that the imitation of a very valuable material is recorded in European Prehistory,” said Carlos Odriozola, an archaeologist at the University of Seville in Spain, who led the new research.

Amber is a unique gemstone in that it's originally organic. The substance forms from ancient tree resin buried in the earth and takes on translucent gold and orange hues. The precious stone has been gathered by humans for at least 13,000 years and acted as a social symbol in European prehistory. Odriozola and colleagues unearthed amber-looking beads from two burial sites in Spain. Two beads were found in an archaeological site near Seville in southern Spain called La Molina that dates to the third millennium B.C. Four other beads came from Cova del Gegant near Barcelona and date to the second millennium B.C. The beads looked so much like the real thing that the researchers didn't notice they were fake until a chemical analysis revealed differently. “Indeed, these beads resemble amber so well that we got first confused when [the analysis] did not match an amber pattern,” Odriozola said. “At that moment, we got very excited about the possibility of having found an amber fake.” Further analysis of the finds revealed mollusk shells form the core of beads from Cova del Gegant. Those from La Molina had seeds at their center and all of the beads were coated with layers of a resin, likely extracted from pine trees, the team reported Wednesday in the journal PLOS One. The researchers suspect the coating was made to imitate the look of amber.

The researchers know the beads are fakes, but are still working out why they exist. Odriozola and colleagues propose three possible explanations. The first plays on the fact that amber is rare. It’s possible a shortage of real amber inspired the creation of imitations. Alternatively, the production of a low-cost product that serves the same social function as amber for members of society who could not afford the real gems is plausible. But the third possibility appears the most likely: Traders who could not acquire the valuable and rare items developed counterfeits to sell as the real thing and cheat their clients. The researchers say this last option might have been the case in Cova del Gegant, where the four resin-covered beads were found alongside two genuine amber beads that are nearly identical in size and shape. Visually, the authentic beads and the counterfeits look exactly the same. “The quest for power and wealth are conspicuous behaviors in humankind that would fit perfectly on middlemen cheating wealthy people to acquire wealth and power,” Odriozola said. Plus, Odriozola says, if the tradesmen fooled him and his colleagues, who are well-trained archaeologists, with the fake amber, then it's almost certain they also pulled one over on the wealthy community members.