Before there was penicillin, there were still antibiotics. Even some animals have been known to treat themselves. 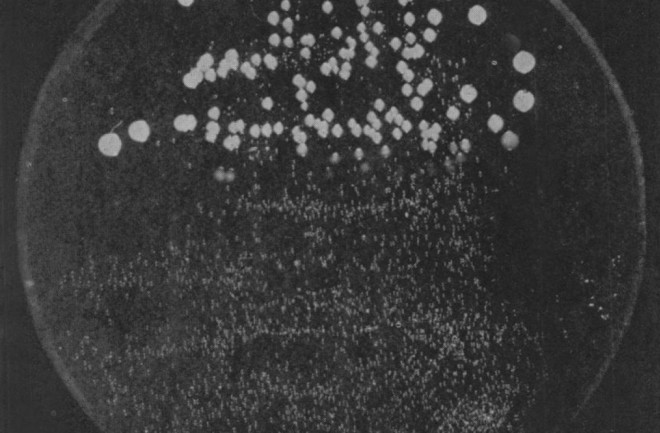 A culture plate from Fleming's experiments seeded with infectious bacteria and with penicillin placed on the lower half. (Credit: Alexander Fleming/The British Journal of Experimental Pathology)

Long before Alexander Fleming discovered penicillin in 1928, people were using antibiotics to combat infections. In the late 1800s, French physician Ernest Duchesne observed Arab stable boys treating sores with mold growing on saddles. Duchesne took a sample of the fungus, identified it as Penicillium and used it to cure guinea pigs infected with typhoid.

Earlier still, texts from ancient civilizations, including Rome, Egypt and China, discussed the healing powers of moldy bread applied to diseased skin. And prior to written history, there’s reason to believe human ancestors took advantage of many medicinal fungi, plants and other natural agents. The use of natural remedies probably extends back millions of years — long before modern scientists understood the biochemical basis of these medicines.

Other Animals Treat Themselves

One reason to assume early human ancestors used natural substances: The behavior has been documented in many species, from caterpillars to sheep. Animals suffering from a parasite or other malady will deliberately consume substances that are medicinal, but have little or no nutritional value. The substances may even be avoided by healthy individuals and harmful in excess. Yet in small doses, they eliminate or prevent disease.

For example, in a 2015 Evolution paper, researchers gave groups of ants either standard honey-based food or the same stuff laced with hydrogen peroxide (H2O2). In the wild, the chemical is found in foods the insects sometimes eat, such as ant cadavers and secretion from aphids. When the ants were healthy, there were more deaths among those given the chemical chow; hydrogen peroxide is generally harmful to ants. However, after exposure to an infectious fungus, they consumed more H2O2, which killed the fungus and improved their survival rates.

A chimpanzee eating leaves. When infected with intestinal worms, chimps will sometimes eat prickly leaves to flush them out. (Credit: LMPphoto/Shutterstock)

Our closest living relatives, chimpanzees, are also known to self-medicate. Across their natural habitat in central Africa, chimps infected with intestinal parasites fold up and swallow leaves with prickly hairs. As the leaves travel through a chimp’s gastrointestinal track, the rough surface catches worms and carries them out with the next bowel movement.

Sick apes also eat the pith — the bitter, spongy inner stem — of the Vernonia amygdalina, a member of the daisy family known for its medicinal properties. Scientists have identified many therapeutic molecules in the V. amygdalina pith, including sesquiterpene lactones, stigmastane-type steroid glucosides and aglycones. I don’t know what these molecules are, but more importantly, neither do chimps. Animals don't have to understand the biochemistry underlying their cures. They just know to ingest these substances when sick, through innate knowledge, personal experience or imitation.

The fact that non-human animals use natural medicines means it doesn't take sophisticated technology or advanced cognition to discover them. It’s likely these behaviors were part of our ancestors’ repertoire, long before scientists or even Homo sapiens existed.

In addition to assuming early humans self-medicated because many animals do, researchers have found natural remedies preserved at archaeological sites. Though we cannot know if the substances were deliberately administered for health, their abundance in association with human fossils and artifacts suggests this was the case.

In a 2019 Evolutionary Anthropology paper, archaeologist Karen Hardy analyzed plant species recovered from seven archaeological sites in the Near East, dating between about 8,000 and 790,000 years ago. During this span the region was occupied by Homo sapiens, Neanderthals and earlier forms of human ancestors. Of the 212 plant species identified, around 60 percent were medicinal and edible; they could have been used for food, medicine or both. Another 15 percent were non-edible, but may also have had curative properties in small doses.

In earlier work Hardy and colleagues studied molecules trapped in the fossilized dental plaque of ~50,000-year-old Neanderthals from the site of El Sidrón, Spain. In one female specimen with a tooth abscess, the team identified compounds that likely came from from yarrow and chamomile, bitter plants with little nutritional value, but known for their medicinal properties. Geneticists later probed the plaque of the same Neanderthal and found DNA from poplar — a tree that contains salicylic acid, the natural pain-killer in aspirin — as well as a type of Penicillium.

Now it’s possible minuscule DNA fragments of these organisms wound up in the Neanderthal’s mouth by accident, as she slept on the ground and lived in nature. But it’s also conceivable that this individual, in pain from an oral infection, intentionally took pain-killing poplar, soothing chamomile and antibiotic fungus. If that's the case, she used the penicillin 50,000 years too soon to share the Nobel Prize in Medicine awarded to Fleming for (re)discovering it in the 20th century.