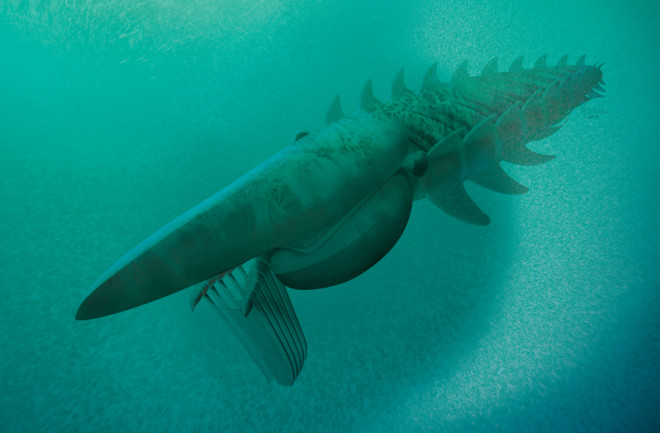 An artist's reconstruction of a newly discovered prehistoric sea creature that swam the oceans some 480 million years ago. (Credit: Marianne Collins, ArtofFact)

Life in prehistoric oceans could be pretty terrifying. Take for instance the predatory jumbo shrimp that roamed the oceans 480 million years ago.

But a newly discovered species of the giant arthropods is more of a gentle giant. Aegirocassis benmoulae, identified from fossils found in Morocco, was a 6-foot-long filter feeder that supported its massive heft by skimming the oceans for plankton. That makes it one of the biggest arthropods ever found, and also the first-ever giant filter-feeder.

Large and In Charge

A. benmoulae belongs to a group of prehistoric, top-of-the-food-chain predators called anomalocaridids. These creatures grew to be two to six feet in length and had segmented, spiny bodies. Most used two thorny frontal limb-like structures to snatch and kill worms and other prey.

These early ancestors of crustaceans, insects and other modern arthropods dominated the seas during the Cambrian and Ordovician periods, 540 to 480 million years ago. A. benmoulae appears to be one of the last of the anomalocaridids.

A. benmoulae differs in one key way from typical anomalocaridids: While most were hunters, A. benmoulae appears to have used a basket-like filter-feeder at its head to catch plankton. The filter-feeder is akin to the plankton-panning mouths of modern baleen whales, indicating that the two lineages separately converged on the tactic.

Smaller and more ancient filter-feeding anomalocaridids have been discovered, but A. benmoulae is substantially larger. That’s probably thanks to plentiful food: the Ordovician period saw an explosive growth in plankton and consequently many new types of filter feeders evolved. Researchers published their findings Wednesday in the journal Nature.

Researchers believe the A. benmoule fossil represents the last of its kind, however. For those who like swimming, perhaps that wasn’t such a bad thing.