Prehistoric Females Were Strong As Hell 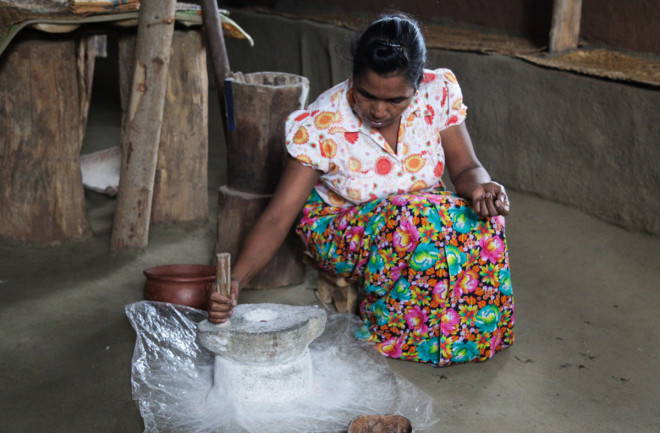 A Sri Lankan woman grinds flour by hand, similar to how prehistoric women may have. (Credit: Adam P/Shutterstock) Compared to hunting and gathering, farming can seem like pretty easy work. But the skeletons of Central European women who lived during agriculture’s earliest days would like to tell you otherwise. An analysis of prehistoric women’s upper arm bones shows they took on formidable tasks of manual labor, likely during the course of tilling, harvesting and otherwise managing farm fields. And the hard work left them pretty beasty — it was enough to make them stronger even than modern female competitive athletes today, researchers say.

Bad to the Bone

Cambridge archaeologist Alison Macintosh led a team of scientists who published a study Wednesday in Science Advances comparing the bone structure of modern female athletes to female farmers in the Neolithic period and Bronze and Iron Ages. Not only is this the first study to compare the bones of ancient women to those of women today, but the research is also notable for not using male skeletons as a comparison point. Previous bioarchaeological studies of prehistoric behavior compared the skeletons of women directly to the skeletons of men. Because men’s bones bulk up more noticeably in response to strain, these studies made it appear as though women weren't doing a lot of the heavy lifting — both literally and figuratively. The researchers say these unequal male-to-female skeletal comparisons have resulted in an underestimation of the physical tasks women took on in ancient times. It’s also obscured some of the differences in how men and women worked. With laser scans and molds, the researchers analyzed arm and leg bones from female skeletons thousands of years old. Assessing the bones’ shape and rigidity let them ascertain the amount and type of physical strain endured by prehistoric women. Things like tilling soil, harvesting crops, and grinding grain for as much as five hours a day to make flour made them exceptionally strong, the researchers say. This is in comparison to ancient men, whose leg bones show signs of increased strain, indicating a focus on hunting and gathering. "By interpreting women's bones in a female-specific context we can start to see how intensive, variable and laborious their behaviors were, hinting at a hidden history of women's work over thousands of years," said Macintosh. Bone density and content is widely variable depending on factors such as diet and age, so we should be a bit cautious in our interpretations, but the researchers' findings are clear — prehistoric women shouldered a much greater load than we thought.

To get a more accurate picture of how ancient females stacked up, the researchers then compared them to the bones of contemporary female athletes, instead of men. The researchers took CT scans of modern sedentary women as well as female rowers, endurance runners, and soccer players at Cambridge. They found that Neolithic women’s leg bones were about as strong as those of modern rowers, but their arm bones were significantly stronger — about 11-16 percent. Compared to sedentary students, the gap was as high as 30 percent. But other than the fact that these women were quite strong, there are other useful findings as well. Women's leg bone strength appears to decrease between the Neolithic and the Bronze Age, indicating that men and women's activities began to increasingly diverge. Women became less mobile as they focused on agriculture, shifting the load to their arms instead. It’s an indication that women played an integral role in the development of agriculture across Europe. In addition, the study highlights the importance of comparing prehistoric female behavior to that of other females, bringing new light to the lived experience of women through the ages.