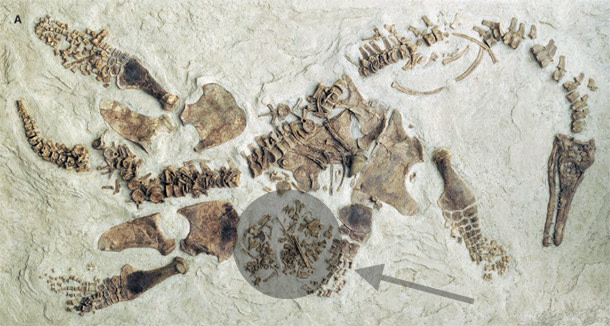 In 1987, Charles Bonner discovered the fossilised bones of a large sea reptile on his family ranch. It was a flipper-limbed plesiosaur, probably Polycotylus, and one of many such fossils recovered from Logan County in Kansas. But this specimen was special – there was a smaller one inside it. This plesiosaur was pregnant. The Bonners donated the find to the Natural History Museum of LA County, where it languished for years. No one had the resources to prepare and study it until Luis Chiappe decided to include the specimen in the new exhibit halls he was preparing. He brought in Robin O’Keefe from Marshall University to analyse the historic find. The mass of small bones inside the adult is haphazardly arranged, but O’Keefe and Chiappe think that it was clearly a foetus. The skeleton shows signs of incomplete growth, as it includes the distinctive forearm bone of Polycotylus. It shows no signs of having been chewed or exposed to stomach acid, so it wasn’t a youngster that the adult had cannibalised. O’Keefe and Chiappe’s discovery suggests that this reptile gave birth to live young. This isn’t that surprising. Most modern reptiles lay eggs but many groups have abandoned this strategy in favour of live births. Throughout reptile history, live births have evolved has happened no fewer than 80 times, and that’s just among living species. Several extinct groups also gave birth in the same way, including the fearsome mosasaurs and the dolphin-like ichthyosaurs. We know this because people have found fossils of pregnant females, and a particularly extraordinary one of an ichthyosaur killed in the act of giving birth. But until now, despite hundreds of fossils and over 200 years of collection, no one had found a pregnant plesiosaur. Even their close relatives, the nothosaurs, have yielded a pregnant specimen even though we have far fewer nothosaur fossils. The British palaeontologist Harry Seeley claimed to have found a plesiosaur embryo in 1895, but when others examined the specimen, it became clear that he had actually found fossilised shrimp burrows! The Kansas plesiosaur finally fills in that longstanding gap. Based on the embryos of other marine reptiles, O’Keefe and Chiappe think that the Polycotylus foetus was at most two-thirds mature. Even so, it was already 1.5 metres long. Given that mum was less than 5 metres long, she was carrying a very big baby indeed. If she had lived long enough to give birth, her infant would have been a third to half her length. By contrast, other marine reptiles gave birth to young that were no more than 30 percent as long as they were. 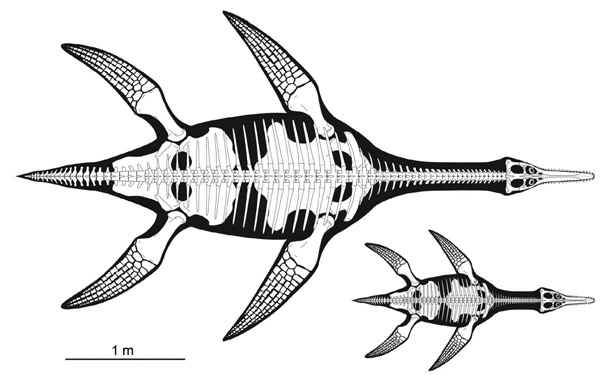 The large foetus could help to explain why pregnant plesiosaurs have been so hard to come by. O’Keefe and Chiappe think that most marine reptiles, like ichthyosaurs and mosasaurs, gave birth to several relatively small young, and they did so quickly – this is why there are pregnant females all over the fossil record. An evolutionary biologist would say that they are “r-selected” – they adopted a quantity-over-quality strategy. By contrast, plesiosaurs were “k-selected”. They prized quality over quantity – they had fewer offspring, but they invested a lot in each one. It looks like they were alone in that regard in the seas of the Cretaceous. In fact, O’Keefe and Chiappe think that modern dolphins and other toothed whales come closest to recapping the plesiosaur’s reproductive habits. They too give birth to one large, well-developed infant at a time. Whales and dolphins also live in tight social groups, and they care for their young for a long time after birth. O’Keefe and Chiappe wonder if the plesiosaurs did too. Among modern reptiles, there are virtually no species that give birth to small numbers of large, live young, like the plesiosaurs did. It is perhaps telling that the only exceptions to this rule – a group of Australian skinks – also live in groups and also look after their young. Perhaps the seas of the Cretaceous were full of plesiosaur parents, travelling in sociable pods and nudging their youngsters alongside them. Reference: O’Keefe & Chiappe. 2011. Viviparity and K-Selected Life History in a Mesozoic Marine Plesiosaur (Reptilia, Sauropterygia). Science http://dx.doi.org/10.1126/science.1205689More on prehistoric sea reptiles: