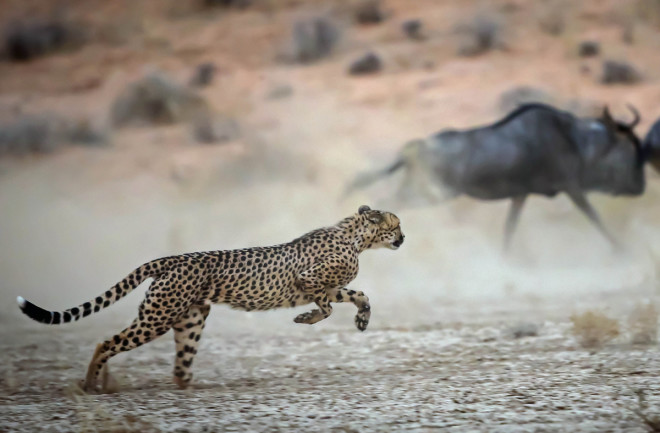 (Credit: Andre Marais/Shutterstock) Finding food is a risky undertaking for wild animals. But for some predators, the element of risk, and it's twin, luck, is a much greater factor. Predators like the cheetah aren't guaranteed meals when they set out to hunt, researchers find in a new study, and that puts them at risk in rapidly changing environments. Where they once could count on getting lucky often enough to survive, a scarcity of prey now makes predators susceptible to starvation and population declines. The work could impact conservation tactics, the researchers say. “We know that animal populations across the world are taking a hit, with the most charismatic animals like lions and cheetahs being among the worst affected, but up until now it hasn’t been clear why,” Rory Wilson, a biologist at Swansea University in the United Kingdom, who led the new research, said in a statement. “Our study has revealed that animals that use a high-risk gambling strategy to find food like lions and tigers, which have to search for long periods before they get lucky and find prey, are more likely to fail to accrue the energy they need to breed, compared to animals that adopt a low-risk gambling strategy like herbivores such as zebras.”

Wilson and colleagues tracked the daily habits of four distinctly different animals — sheep, penguins, cheetahs and condors — in their native habitats with a device the researchers say is akin to an airplane’s “black box flight recorder.” The instrument combines GPS technology and accelerometers to give the scientists information about the animals’ whereabouts, movements and how much energy they are using. Plus, it provides details about the weather and even if the animal is in the sun or shade. The researchers taped the gadgets to the animals’ backs or secured them on a collar. The team found that how much food the animals managed to eat depended on whether they happened to find any. Sheep grazed constantly on readily available, easy-to-find vegetation. The ruminants took bites about every five seconds and all the sheep the researchers monitored were more or less equally successful in their foraging, according to the study. Magellanic penguins’ feeding strategy raised the stakes. The animals pursued prey in hunting trips that lasted 18 hours. Like the sheep, the birds also ate more or less continuously but some penguins were more successful in finding food than others, the researchers report. They say that’s likely because some penguins are simply better hunters, but the patchy availability of prey may have also contributed to an individual penguin’s hunting success.

In contrast to sheep and penguins, cheetahs and condors engaged in a high-risk gamble to get enough nutrition. That means the odds of getting food every hunting trip aren't very good, and it can lead to long gaps between meals. Some cheetahs could find food within a couple of hours, but others had to wait more than 17 hours between meals. For condors, that gap was even bigger. Some birds took less than half an hour to find food, but others were subjected to fasting for 35 hours, nearly a day and a half, the researchers report today in the journal Current Biology. Up until now, the animals were able to wait out those periods of ill luck, confident that their fortunes would turn. But, as prey dwindles due to climate change and other ecological disruptions, it's as if the game has become rigged against the predators. If those gaps in feeding stretch out too long as a result of an unlucky period, it could lead to starvation and death. In follow-up models, the researchers found predators are at risk for plummeting populations because of some individual’s failure to find enough food. Even small changes in the availability of prey could be “the straw that breaks the camel’s back” for the hunters, Wilson said.