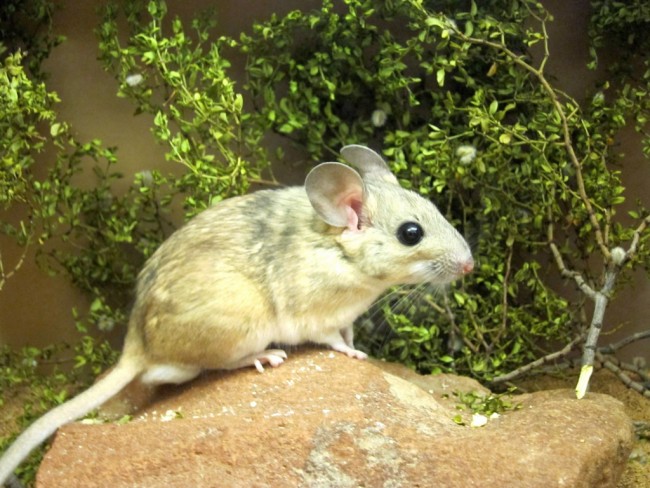 Can't eat poison without dying? Maybe your gut microbes are to blame. Rodents in the Mojave Desert have evolved to eat toxic creosote bushes with the help of specialized gut bacteria. Although scientists had long suspected that bacteria might be key to the rats' power, they proved it by feeding the rodents antibiotics and ground-up feces. The desert woodrat or Neotoma lepida lives in dry parts of the western United States. (You might know woodrats as "pack rats"; they build elaborate nests out of debris they've hoarded.) In the southern part of the desert woodrat's range, a bush called creosote grows. Its leaves are coated in a toxic material—the key ingredient, nordihydroguaiaretic acid, normally damages the kidneys and liver of rodents. Yet desert woodrats that live in the creosote bush's range can eat it without any trouble. In fact, the amount of creosote a desert woodrat eats in just a day would kill a laboratory mouse. University of Utah biologist Kevin Kohl says it's "conventional wisdom" that the woodrat's ability to eat poison comes from the bacteria that live in its gut. But it was difficult to study any animal's gut microbes before recent advances in DNA sequencing, he says, because most of these bacteria can't be grown in the lab. Research on gut microbes and toxic foods has usually been done in farm animals, and with just one compound at a time instead of a whole poisonous plant. Now Kohl captured wild woodrats in Utah to find out what was really happening. He gathered creosote-munching animals from the Mojave Desert region. Setting his traps a little farther north, he also captured woodrats that had never encountered creosote. Kohl fed the Mojave rats diets with increasing amounts of creosote, then sequenced the genes of their gut microbes. He found that after eating creosote for several days, the rats held a different community of bacteria in their guts. These bacteria had more genes for breaking down so-called aromatic compounds like nordihydroguaiaretic acid, as well as genes associated with responding to stress. Next, Kohl wiped out those bacteria by feeding the woodrats a course of antibiotics. Then he gave them some more creosote extract. At just 2% of their diet, the creosote was a dose that even non-Mojave woodrats can usually stomach. But after taking antibiotics, the woodrats only picked at their food. Within two weeks, all of them had lost more than 10% of their body weight and had to be removed from the experiment. That was pretty convincing evidence that bacteria let woodrats eat what they eat. But to be even more sure, Kohl did a fecal transplant. Putting one animal's feces into another animal is an effective way of donating gut microbes. Kohl ground up feces from either creosote-eating or non-creosote-eating donor woodrats. Then he "transplanted" it into the guts of woodrats that don't normally eat creosote. Transplanting, in this case, meant simply putting the ground-up poop in their food. But this is nothing a woodrat would find disgusting—the animals ordinarily store and eat their own droppings to get more nutrients out. After eating their Mojave peers' poop, the northern woodrats could better tolerate a creosote diet. They maintained a healthy weight while eating creosote for longer than they could have otherwise, suggesting that the poop bacteria were key to eating poison

. Creosote bushes only moved into the desert woodrats' habitat about 17,000 years ago. Yet the rodents have adapted to comfortably eat and survive on the plants. Kohl and his colleagues think woodrats evolved to more effectively detoxify the plants with their livers, while also recruiting new toxin-busting bacteria to live in their guts. Where did those bacteria come from? They might have lived on the plants themselves, or the rats may have picked them up through their habits of eating soil and assorted animals' feces. However they did it, the shift allowed the scrappy desert animals to thrive on a whole new set of resources. Don't feel too jealous, though; they still live in a pile of garbage. Image: Kevin Kohl.