Poop on a Stick Tests Penguins' Sense of Smell 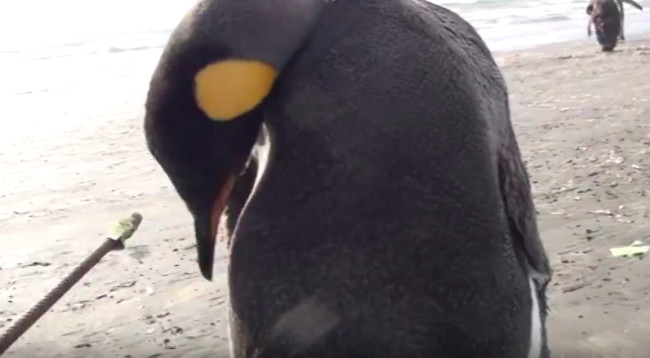 Who doesn't enjoy waking to a pleasant smell wafting past? Unfortunately for them, the penguins in a recent study woke up not to pancakes frying nearby, but to less appetizing aromas—for example, feces on a stick. But scientists promise the experiment taught them valuable lessons about a penguin's capabilities. Besides, they let the birds go right back to sleep. "Research into the sense of smell in birds has a bit of a dubious history," says Gregory Cunningham, a biologist at St. John Fisher College. In recent decades, scientists have begun to get a better grasp on what birds can smell, but there's still a lot to learn. With king penguins (Aptenodytes patagonicus), researchers have focused more on sound than smell. The birds form monogamous pairs to breed; parents take turns caring for the egg or chick and foraging for food. When a penguin returns from the sea, it uses the sound of its partner's squawk to find it among the huge breeding colony. Penguins seem to use their sense of smell to help them hunt for fish, so it's possible the birds also use smell to find each other. Maybe they can sniff out the colony when they're getting close; maybe they can even recognize the individual scent of a partner. The first step toward finding out is to see how penguins react to the smell of other penguins. Do they notice the smell of penguin feces or feathers? Cunningham and his coauthor, Francesco Bonadonna, studied a king penguin colony in the Kerguelen Islands. (Coincidentally, the scientists shared a beach with some other researchers you may have read about here, who were studying whether penguins find each other's beaks sexy.) To test the birds' sensitivity to smells, Cunningham and Bonadonna would use a very simple test: could the smell wake a sleeping penguin? The researchers wrapped duct tape around the ends of metal dowels, sticky side out. Then they rolled the tape in one of three materials: ordinary sand, recently molted penguin feathers, or fresh penguin poop. Cunningham says the feathers and feces were both easily detectable to a human nose. (The feces "did not smell very good," he notes, while the feathers had a more subtle, "perhaps musky" odor.) On the beach, they looked for penguins that were asleep, standing with their beaks tucked under one wing. They tested 108 sleeping birds. Each time, a researcher crept up to the penguin and held one of the odor sticks about an inch beneath its beak. After 15 seconds, they scored the bird's reaction. A penguin got a score of zero if it kept dozing, 1 if it moved its head a little or clacked its beak, 2 if it twitched, and 3 if it woke up outright. Penguins reacted significantly more to feces or feathers than they did to sand. The bird in the video below, for example, was presented with a feces stick. https://youtu.be/N6VF-3TXC9E It may not be shocking that an animal can smell a blob of poop. But Cunningham says this preliminary experiment will eventually help us understand how penguins use scent to get around. He's shown that the birds can detect the smell of other penguins; the next step will be to learn whether they use these smells to rendezvous with their colonies or partners. "We’re taking a species that has long been thought to use primarily acoustic cues to identify each other," Cunningham says, "and adding another layer of complexity to their umwelt, their sensory world." Meanwhile, the animals probably wish the scientists would add a layer of something between those poop sticks and their beaks. Image and video courtesy of Gregory Cunningham.