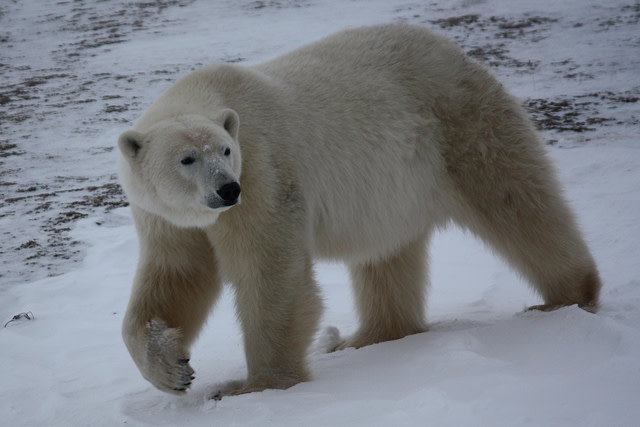 If a polar bear tells you to talk to the hand, don't be offended. The animals seem to communicate with each other through scent trails left by their paws. Their tracks tell a story to the other bears roaming their habitat, helping potential mates to find each other—as long as there's habitat left, anyway. As they crisscross the snowy Arctic, polar bears are usually alone. In other solitary bear species, animals leave messages for each other by rubbing their bodies or urine onto trees or rocks, for example. These objects can become like bulletin boards for bear society. But the icy home of polar bears doesn't include many vertical objects to rub up on. In the past, people have noticed that polar bears sometimes sniff the footprints of other bears. Could there be chemical information hidden in the giants' tracks? To find out, researchers from the San Diego Zoo, Polar Bears International in Bozeman, Montana, and the Alaska Science Center gathered scent samples from the feet of 203 wild polar bears. All of the samples were taken in the spring, when polar bears breed. To capture each bear's scent, researchers rubbed a cotton swab between its toes. The scientists sorted these foot-scent samples by what type of bear made them. Was it a male or a female? If female, was she in her fertile period? Then they went to 10 North American zoos and tested 26 captive polar bears to see how they responded to the foot scents of strange bears. In case the toe swabbings from the wild bears contained any disease-causing agents—and in case the captive bears wanted to, say, lick them—the researchers smeared each scent sample onto a piece of cardboard and propped it inside a little wooden box. The captive bears could smell and approach the boxes, but couldn't touch the samples directly. Researchers hung pairs of scent boxes near each captive bear and watched to see which box interested it more. They measured bears' interest in three ways: approaching the box, sniffing the box, and "flehmen"—a certain kind of mammalian smelling in which the animal curls back its upper lip and snuffs up scent with its mouth. In general, bears were more interested in foot scents from the opposite sex. They were more likely to approach the scent boxes in spring (their breeding season) than in fall. And in the spring, male bears showed almost twice as much interest in the scent of fertile females as non-fertile ones. Clearly, the captive polar bears were reading some sort of information in the scents from other bears' feet. When researchers dissected the feet of two already-dead polar bears, they found "prominent" sweat and oil glands. These glands might be responsible for the signature smells bears leave in their tracks—although, the authors note, they can't rule out that polar bears also use urine for scent marking. Judging by the captive bears' special interest in scents from the opposite sex—especially in the spring, and especially when fertile—it seems polar bears use signals in foot smells to track down potential mates. By following a set of attractive footprints, a lone polar bear can find itself a partner and make more polar bears. But, the authors point out, this will only work as long as the sea ice that bears walk across is intact. The more it melts, the more bears' trails will be fragmented, leaving them stuck with no one's feet to smell but their own.