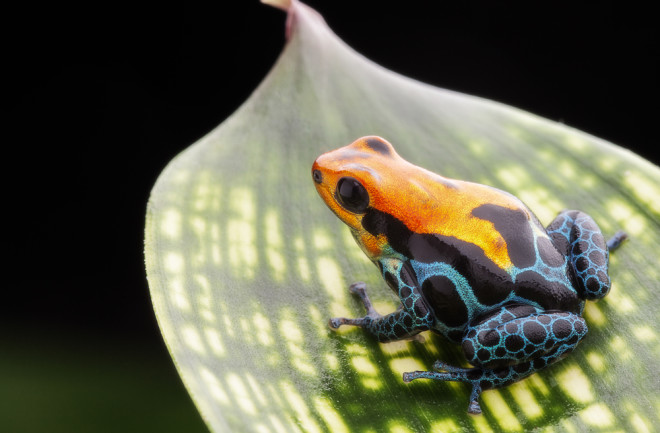 The chemical weaponry of this beautiful little dart frog come at a high evolutionary cost. Photo by Dirk Ercken Poison dart frogs are some of the most stunning species on Earth. But their vivid colors aren't for aesthetics: they're meant as a warning to potential predators. For while these frogs are visually stimulating, they are also armed with potent toxins. The poisons in their skin are so powerful that local tribes have been known to create deadly darts simply by rubbing them on the frogs' backs — hence the name. One might expect that the evolution of such a successful defense would allow these frogs to diversify faster than their relatives and outcompete their kin for resources and habitats — and, according to a study published in the early edition of Proceedings of the National Academy of Sciences this week, their toxins do give them a speciation advantage. But, their defenses don't come cheap: poisonous frog species also go extinct at a faster rate. "Amphibians are facing global population declines and extinctions," explained Kevin Arbuckle, a herpetologist and evolutionary biologist at the University of Liverpool. "I thought it might be useful to figure out whether defense can influence their chances of diversifying or going extinct." Arbuckle was interested in testing a hypothesis proposed fifty years ago, known as "escape and radiate". The hypothesis predicts that the development of a new way of avoiding being eaten — such as a defensive toxin or camouflage — should allow an animal lineage to diversify faster than others. Thus, one would predict that lineages with such antipredator adaptations would have more species than those without.

The anuran phylogenetic tree, showing toxic and non-toxic linages. Image by K. Arbuckle But while that sounds like an easy thing to determine, it takes a lot of information about the animals themselves as well as robust statistical analyses to truly put the escape-and-radiate hypothesis to the test. And while the hypothesis has been tested in plants, few animal studies have been able to amass the data necessary to see if escape-and-radiate holds true. Arbuckle realized that frogs and toads provided a perfect opportunity to see if the decades-old idea withstands such empirical examination. "Aside from being really cool animals generally, amphibians are very variable in whether or not they possess chemical defenses," he said. "I matched [toxicity and coloration] data to what we call a 'phylogeny' or 'evolutionary tree' and applied some complicated mathematical and statistical models to let me get to the bottom of my questions." And, just as predicted, Arbuckle found that toxic defenses led to higher rates of speciation. Both being toxic and pretending to be — having a conspicuous color pattern, even without the poisons to back it up — led to faster diversification in frog and toad lineages. And, not surprisingly, the animals more likely to evolve toxic defenses than to lose them, which makes sense for a trait that spurs speciation. "The study revealed that the strategy an amphibian uses to defend itself can have important implications for its evolution," said Arbuckle. "However, not all of the relationships we found were as we expected."

"By far the most surprising finding was that species with a chemical defense, although more likely to undergo speciation, were far more likely to go extinct!" said Arbuckle. The same was not true of the mimics, who only boasted conspicuous coloration. In fact, toxic anurans died out so much more readily that their net diversification rate was slower than their palatable brethren. "This was completely unexpected, and has potential implications for understanding what makes many amphibians vulnerable to extinction." But why is it so costly to be poisonous? No one knows. "As with any good scientific study this one has generated yet more questions," said Arbuckle, though he has a couple plausible explanations for the patterns he saw. It's possible that producing and/or storing toxins* is energetically burdensome, and thus poisonous species have to consume more food or sacrifice when it comes to growth or reproductive effort. If that's true, then those species would struggle more when times are lean than those that don't need as much fuel. Or, it may have to do with the fact that poisonous species also have what scientists refer to as "slower life histories": they live longer, take longer to mature, and produce fewer offspring per lifetime (babies which usually require more parental care). While such traits can be beneficial (just look at where they've gotten us!), species with slower life histories are more vulnerable when population sizes suddenly shrink — like when an area is struck by Chytrid fungus, one of the current major threats to amphibians. Arbuckle says the next step is to get to the bottom of this mystery and determine why it's so evolutionarily expensive to produce poisons. "Although the pattern of extinctions is well-supported by the study, it would be great to have a better handle on what is driving them." But perhaps more importantly, Arbuckle would like to investigate whether current extinction patterns echo the historical extinction risks determined by this study. "This is important if we are to relate our work properly to conservation issues today." Ultimately, such data may help conservation scientists determine which species are most likely to die without our help, ensuring that hard-won resources are used in the most efficient manner possible. Citation: Arbuckle, K and MP Speed (2015). Antipredator defenses predict diversification rates. Proceedings of the National Academy of Sciences, published online on 19 October 2015 ahead of print. DOI: 10.1073/pnas.1509811112 *

Not all poisonous frogs produce their toxins themselves! Poison dart frogs are a great example: without their toxic food source, these deadly amphibians become harmless.