Anyone who has played video games for too long is probably familiar with the sore, tired and dry eyes that accompany extended bouts of shooting things with rocket launchers. So it might come as a surprise that playing games could actually improve a key aspect of our eyesight.

Renjie Li from the University of Rochester found that intensive practice at shoot-em-ups like Unreal Tournament 2004 and Call of Duty 2 improved a person's ability to spot the difference between subtly contrasting shades of grey. In the real world, this "contrast sensitivity function" is reflected in the crispness of our vision, affecting how well we see objects that don't stand out well against their backgrounds. It's the key to our ability to drive or walk about at night, or in conditions with poor visibility.

Unfortunately, contrast sensitivity is one of the first aspects of our vision to go with ageing and it's compromised by conditions like lazy eyes. This loss can be caused by either faults with the eye itself or neurological problems. Opticians usually try to treat the former with glasses, contact lenses or laser surgery, but Li's group have found that action video games can provide a counter-intuitive solution for the latter. Compared to other enjoyable but less hair-trigger games, like the Sims, playing shoot-em-ups seems to improve contrast sensitivity and their benefits last for months or even years.

Li tested the eyes of 10 expert action gamers by checking their ability to detect "Gabor patches", a small square of alternating dark and light bands appearing against a grey background. The width of the bands can be widened or narrowed to make the patch more difficult to spot, and the higher your contrast sensitivity, the more the bands can be narrowed before they become undetectable. Using this test, Li found that the gamers had higher contrast sensitivities than 10 other students of similar ages who didn't play video games. 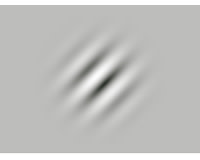 However, this could just mean that people who are most sensitive to contrasts are more likely to play video games. To discount that idea, Li recruited 13 non-gamers and threw them into the deep-end. He made them train for 50 hours on a specific game within a 9-week period. Six of the noobs spent their fifty hours shooting away on Unreal Tournament 2004 and Call of Duty 2, while the other seven played The Sims 2, a challenging but comparatively sedate game that doesn't require fast aiming skills.

After their baptism of fire, the Sims players showed no improvements in the Gabor patch test, while the action-gaming cadets fared much better. In less than 2 months, their contrast sensitivities had gone up by 43-58% and all six showed significant improvement.

Some time later, Li invited his trainees back to the lab. For some, it had been five months since the initial experiment and for others, it had been more than a year. In that time, none of them had become avid gamers. Even so, they were still benefiting from their intensive training. When Li tested them again, he found that contrast sensitivities of the action-gamers were still higher than the levels before the experiment, while the Sims-players were still languishing at the same baseline.

This is the first time that anyone has successfully developed a training programme that can improve contrast sensitivity in adults. The study used a very small sample size, so it will be interesting to see if the same benefits can be seen in a larger group. Nonetheless, the fact that the effects were so long-lasting is impressive. The fact that each volunteer was a young, healthy adult, with good eyesight that should have been in its prime, is more impressive still.

So, spending time in front of a computer screen isn't necessarily the mindless and vision-ruining activity that some people claim. While excessive play can put our eyes under a lot of strain, Li's work suggests that more moderate levels of gaming can actually sharpen our vision in at least one important respect. This could be of use in treating conditions like lazy eyes, or in helping people with physical eye defects by retraining their brains to make better use of the fuzzy information they receive.

Li's group is led by Daphne Bevalier and this isn't the first time that she has found that action games can improve aspects of our vision. In 2003, she reported in Nature that gamers who played Grand Theft Auto 3, Crazy Taxi, Half-Life or Super Mario Kart, (somewhat understandably) became better at quickly shifting their attention around their field of vision. They were better at spotting objects amid clutter or quickly counting objects. The next important step is to work out exactly what elements of these games are responsible for the improvements.