Plastic Bags Are a Feast for This Caterpillar 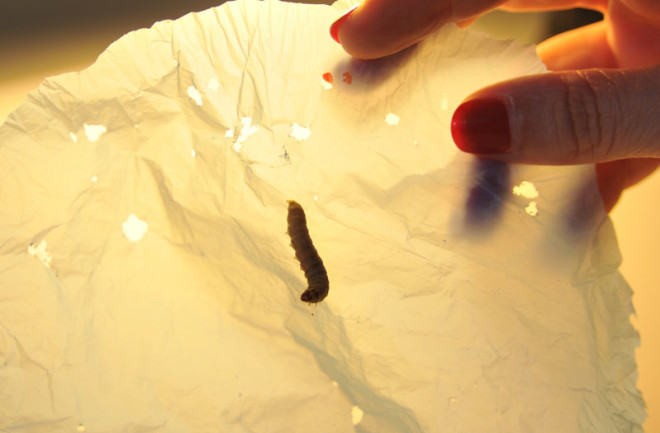 A chunk of plastic after 10 worms spent about 30 minutes feasting. (Credit: CSIC Communications Department) A caterpillar that can eat plastic and produce an industrially useful compound while doing so could take a bite out of the global scourge of plastic trash, a new study finds. Plastics typically resist breaking down, and as plastic use has risen exponentially over the past 50 years, plastic garbage is piling up in landfills and could wreak havoc on wildlife and the environment for centuries.

The most common plastic used in packaging, polyethylene, represents about 40 percent of the total demand for plastic items worldwide, with more than 2 million used every minute around the world. Unfortunately, polyethylene is also one of the toughest plastics, and breaking it down "is almost impossible without chemical pre-treatment or burning, which produces pollution," said Federica Bertocchini, a developmental biologist at the Institute of Biomedicine and Biotechnology of Cantabria in Spain. Now, Bertocchini and her colleagues say that the caterpillar of a common insect, the wax moth, Galleria mellonella, can devour polyethylene and generate an industrially useful molecule. The insect gets its name from how its caterpillars, known as wax worms, normally hatch and grow in beehives.

Wax worm specimens in a petri dish. (Credit: César Hernández/CSIC) Bertocchini typically focuses on the early development of chick embryos, but "in my free time, I am a beekeeper," she said. While cleaning empty beehives, she found wax worms, which are a pest for beekeepers, and placed them in plastic bag. Unexpectedly, after a short while, "the plastic bag was full of holes," Bertocchini recalled. In experiments, the researchers found that when a polyethylene film was left in direct contact with wax worms, holes started appearing after 40 minutes, with an estimated 2.2 holes per worm per hour. After roughly 12 hours, about 100 wax worms had chewed 92 milligrams worth of holes in a standard polyethylene shopping bag. When the scientists rendered wax worms into a slurry, they found out the insects were doing more than just eating the plastic. The caterpillar slurry was capable of biodegrading polyethylene, breaking it down into ethylene glycol, a compound often used in antifreeze and as an ingredient in plastics. The scientists detailed their findings online April 24 in the journal Current Biology.

These wax worms did not evolve to eat plastic; instead, the researchers suspect this newfound ability is a byproduct of eating honeycomb — beeswax has a chemical structure similar to polyethylene's, Bertocchini said. There were a few previous attempts to break down polyethylene using fungi and bacteria, but such biodegradation took weeks to months. One prior study even used bacteria from wax worm guts to break down plastic, but didn't observe that the process generated ethylene glycol, Bertocchini and her colleagues noted. The aim now is to isolate the molecules or microbes that wax worms use to biodegrade polyethylene. "Once we get to that point, we'll see if we can actually produce it at a large scale and apply it to get rid of polyethylene," Bertocchini said. Future research can investigate whether there are other wax-eating organisms that might also be capable of biodegrading plastic. "The wonders of nature are endless," Bertocchini said.